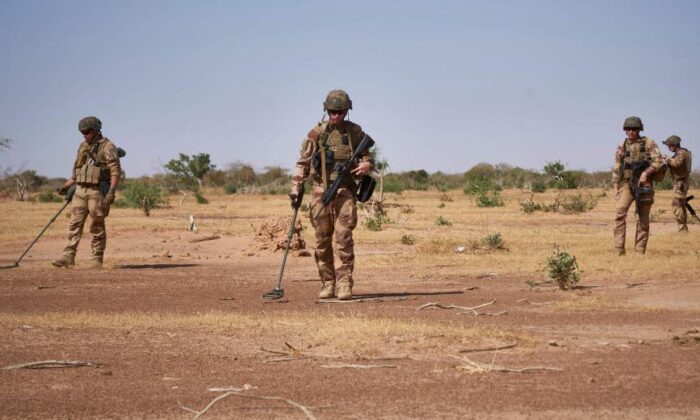 Soldiers from the French army search for the presence of Improvised Explosive Devices during the Burkhane Operation in northern Burkina Faso on Nov. 12, 2019. (Michelle Cattani/ AFP/Getty Image)
World

Russia Steps in to Replace French Military Muscle in Mali

As Russia’s war machine massed on Ukraine’s borders in December, for months it had been expanding its military footprint in the Saharan nation of Mali.

Moscow has quietly positioned itself to replace France as the provider of security technology and weapons, amid France’s move to pull out of a nine-year military campaign in the Sahel.

In an exclusive interview with The Epoch Times, a top security expert in the West African state said Russia “has already answered the call to come to Mali’s aid.”

“The heads of the country are men who have a close relationship with Russia,” Dr. Mady Ibrahim Kante, lecturer-researcher at the War School of Bamako in Mali, said in a late-January email.

“With the final phase of the withdrawal of French troops the transitional authorities have decided to commit to replacing the French military bases with Malian troops with Russian support.”

“Russia could take advantage of the French position, of the political and security situation to advance its pawns in Bamako, as it did in the Central African Republic with success.

“We can see on the ground in Mali, a geostrategic competition between Russia and France—the Russian military who want to replace the French troops of [Operation] Barkhane; Russian trainers instead of those of the West.”

The space left by closing the Barkhane operation will be filled by Russian mercenaries and military advisors, according to David Otto, director of counterterrorism for the Geneva Centre of African Security and Strategic Studies.

“Russia is focused on regaining some of its sphere of influence lost after the collapse of the Soviet Union—as the West is going after Russian former colonies like Ukraine—Russia is doing the same in Africa and the Sahel,” Otto told The Epoch Times in late-January.

“Russia is securing a balance of power in Africa to pay back in the same coin as the Ukraine saga.”

The end of a counter-insurgency operation like Barkhane will be celebrated by insurgency groups in the region, including the Islamic State in West Africa Province (ISWAP), and Al-Qaeda in the Islamic Maghreb (AQIM) Otto said.

“In this case, it will be challenging for any other actor like Russia to fill the vacuum left by France, more so in a situation where France is accused by the host Mali of supporting jihadists. It’s a win for ISWAP and AQIM. It shows a contrary position of lack of global collaboration against global terrorism.”

An Islamist insurgency erupted in 2013 in northern Mali and quickly spread to other parts of the Sahel, a vast and dry stretch of land between the Sahara Desert and the savannah further south.

At the request of the Malian authority of the time (Dioncounda Traore) France’s military intervened through its Operation Serval, later replaced by Operation Barkhane. The latter involved 5,100 French troops working with local forces from the members of the Group of Five for the Sahel: Mauritania, Mali, Burkina Faso, Niger, and Chad.

But on Feb. 17, France and allied nations announced that they were withdrawing troops from Mali due to a breakdown in relations with the ruling junta. The withdrawal applies to both 2,400 French troops in Mali and a smaller European force of several hundred that was set up in 2020 to lessen the burden on French forces.

“Victory against terror is not possible if it’s not supported by the state itself,” France’s President Emmanuel Macron told a press conference alongside European Union and African Union officials.

“Since the Aug. 18, 2020, coup in Mali, the military junta no longer speaks the same language as French leaders, who had accompanied the Malian State since the 2013 transition,” Mady told The Epoch Times.

“On May 24, 2021, Colonel Assimi Goita decided to overthrow the transitional president Bah N’Daou and his prime minister Moctar Ouane, who were considered the guardians of French interests in Mali.

“From that point on, there was heated rhetoric between French and transitional leaders about France’s decision to withdraw its troops from Mali and reconfigure its intervention in the Sahel, effectively pushing Mali’s transitional authorities to request Russian support and assistance militarily as well as economic development,” he said.

The conflict in the northern and central regions of Mali has forced 370,000 people from their homes and compounded existing problems of food insecurity, rural poverty, and deadly community tensions.

French forces have killed thousands of fighters and some terrorist leaders, sowing disorder among their ranks and restricting and even pushing back the Islamist presence.

But terrorists counterattacked, too.

Jihadist attacks in the region increased during Operation Barkhane—rising from 456 in 2014 to 6,276 in 2020, according to data compiled by the Armed Conflict Location and Event Data Project (ACLED).

Since 2013, At least 50 French soldiers have died in the Sahel, raising concerns at home about the conflict’s costs.

Since the beginning of the Malian crisis in 2012, Paris, Washington, and many other partners helped Mali’s terror fight, said Mady.

“Despite these efforts, the country’s security situation is going from bad to worse, with insecurity prevailing throughout much of the country,” he says.

“The United States with its Africom at Mali’s side has decided to align itself behind France, for the withdrawal of troops from certain sensitive areas of Mali, freeing the local populations from the terrorists, thus saying to the Malian military ‘you can handle yourselves, don’t count on us anymore.”’

But France will stay engaged in the Sahel region, even if it pulls out of Mali, Mady said.

“France has imposed the idea of G5 Sahel (Burkina Faso, Chad, Mali, Mauritania, and Niger) to regain its place in its former colonies,” said Mady.

“We have noticed the strong existence of France in almost all the actions of the G5 Sahel, by its strength and financial support.

“With its installation in the Sahel, by finding trusted allies to guarantee its permanent presence, France could decisively withdraw from Mali, [while still] staying with Mali’s neighbors,” Mady added.