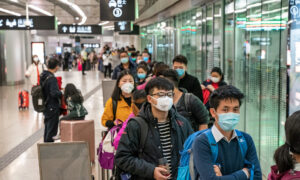 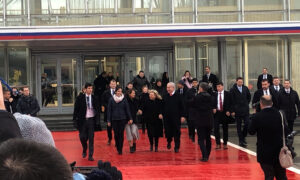 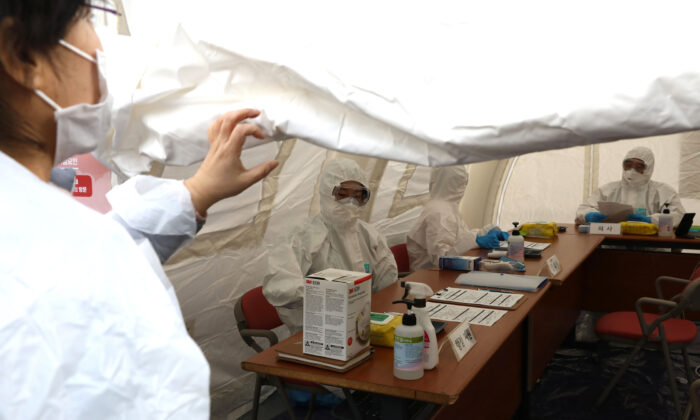 Medical officials waiting for people who want to be tested for the novel coronavirus at Myeongdong shopping district in Seoul, South Korea, on Jan. 31, 2020. (Chung Sung-Jun/Getty Images)
CCP Virus

Russia announced Tuesday it will set up a quarantine zone in Siberia’s Tyumen region, where nationals who will be evacuated from coronavirus-ravaged Wuhan, China, will be held for 14 days.

Russia previously said that it would send planes to evacuate Russian nationals in Hubei Province, the epicenter of the outbreak.

Deputy Prime Minister Tatiana Golikova said that in addition to the Siberian quarantine zone, Russia will temporarily restrict the entry of foreigners arriving from China starting Tuesday. Those restrictions won’t apply to Moscow’s Sheremetyevo Airport, according to the Moscow Times and Reuters.

On Monday, Russian Prime Minister Mikhail Mishustin said that foreigners who test positive for the virus will be deported back to their country of origin, Reuters and The Associated Press reported.

“This will allow us to deport foreign citizens if they are found to have such a disease, and to introduce special restrictive measures, including isolation or quarantine,” he said, according to Reuters.

He added that Russia has “all the necessary medications, protective means to counter the coronavirus spread,” CNBC reported.

Last week, Russia reported its first cases of coronavirus, isolating two Chinese citizens. Meanwhile, Moscow declared an emergency to shut down the 2,500-mile-long border with China and suspended the issuance of electronic visas to Chinese citizens.

“A corresponding instruction was signed today. Work on it is already in progress. We will inform all those concerned properly about the measures to close the border in the Far Eastern region and other steps the government has taken [to prevent the spread of coronavirus in Russia],” Mishustin said during a cabinet meeting on Thursday, according to the state-run TASS news agency.

The Russian evacuation mission will be carried out next week, said Kremlin spokesman Dmitry Peskov.

“Due to the fact that it has taken certain time to finalize the coordination of flight information by the Chinese side, the evacuation of Russian nationals from China by planes of the Aerospace Force will be carried out on February 3-4,” Peskov told the TASS news agency.

Last week, President Donald Trump signed an order to deny entry of any foreign nationals who have traveled to China within 14 days, although immediate family members who have done so will be allowed into the country. The U.N.’s World Health Organization’s (WHO) director-general, Tedros Adhanom Ghebreyesus, declared a global public health emergency in light of the outbreak.

On Tuesday, WHO confirmed that 684 patients have now recovered from the mysterious illness. Dr. Maria Van Kerkhove, an infectious disease expert on the organization’s Emergency Committee, stated that patients are presenting symptoms including fever, a cough, shortness of breath, and confusion.

But she noted that the case-fatality ratio is “difficult to assess.”