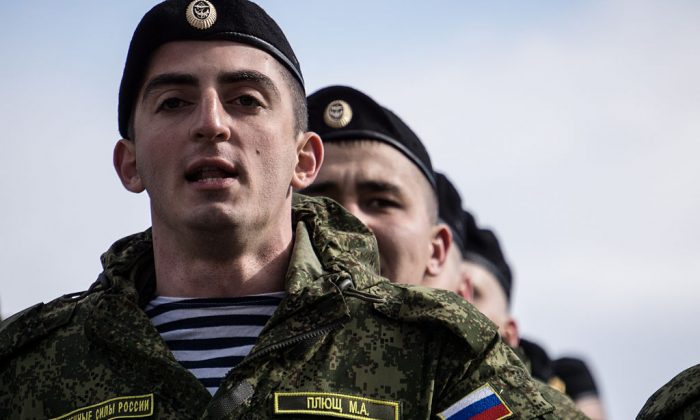 Russia Sends Troops Near Border With North Korea and China

Russia just dispatched troops to its border with North Korea and China.

The troops were photographed on Zaozyornaya Hill, near the border confluence of North Korea, China, and Russia.

Russian soldiers with rifles and guard dogs were pictured near the important southeast Russian border crossing, the Daily Mail reported.

Increase in Russian troops and ordnance along the N. Korean border indicates that Russian intel must have… https://t.co/fYYEZT0SGY

Neither Vladimir Putin nor the Russian government has stated what the troops are expecting to encounter, but the Daily Mail hints at preparations for an influx of North Korean refugees, perhaps people expecting a war. Both Russia and China have official policies of booting escaped North Koreans back to North Korea, where they can face execution.

The presence of soldiers comes just after Putin gave his views on what a war in North Korea would look like. He gave the comments while at a conference in China for the BRIC nations.

“Ramping up military hysteria will lead to nothing good. It could lead to a global catastrophe,” said Putin.

But Putin might be anticipating military action in North Korea. Fyodor Lukyanov, editor of Russia in Global Affairs said that Russia understands what actions North Korea might take.

He claimed via a Financial Times article, “The Kremlin understands the North Korean psychology.” He added “For North Korea, it is not about bargaining, but survival—Kim Jong Un knows the fate of Iraq’s Saddam Hussein and Libya’s Moammar Gadhafi and sees nuclear missiles as his life insurance.”

Others’ views echo Putin, who claimed at the BRIC conference in China, via Foreign Policy, that North Korea “would rather eat grass than abandon their [nuclear weapons] program unless they feel secure.”

Lukyanov and Putin made no mention of other options North Korea has, like how cleaning up its act, ceasing the threatening rhetoric, actually ending the countrywide human rights abuses and abuse of power could also help North Korea foster peaceful relations with the world.

Despite the current threat of North Korea, a recent hearing with U.S. Gen. Joseph Dunford suggests it may be all talk. Dunford is the chairman of the Joint Chiefs of Staff and the highest ranking member of the military.

“While the political space is clearly very charged right now, we haven’t seen a change in the posture of North Korean forces,” said Dunford in front of the Senate Armed Services Committee, on Sept. 26, via CNBC. “We watch that very carefully.”

He also assured U.S. citizens and allies of their safety, guaranteeing that the U.S. military has “postured our forces to respond in the event of a provocation or a conflict. We also have taken all the proper measures to protect our allies—the South Koreans, the Japanese, the force as well as Americans in the area.”

Why Twitter won’t take down Donald Trump’s tweet which North Korea called a ‘declaration of war’ from CNBC.