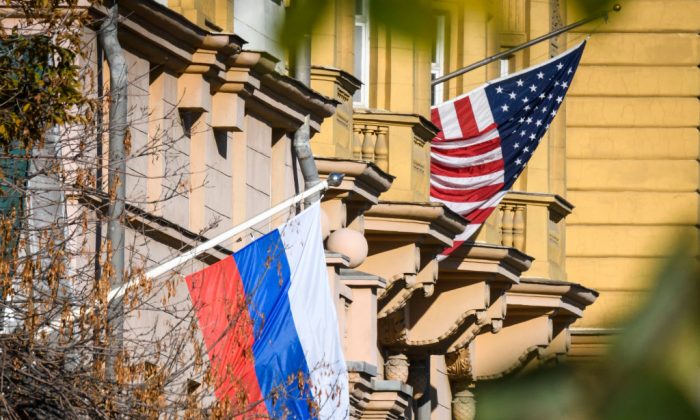 A Russian flag flies next to the U.S. embassy building in Moscow, on Oct. 22, 2018. (Mladen Antonov/AFP/Getty Images)
Europe

“The American military and their NATO allies have moved on to provocations against civilian aircraft, which endangers the safety of the airspace and human lives,” Zakharova said in a statement.

As a result, the U.S. Embassy in Moscow was handed a “note of protest” on Dec. 8 over the alleged incidents, she said.

Russia, Ukraine, and NATO have all stepped up military exercises as tensions have mounted in the past month. Russian military aircraft were scrambled on Wednesday to escort French Rafale and Mirage fighter jets flying over the Black Sea, RIA news agency quoted the defense ministry as saying.

For weeks, Ukraine’s leadership has warned the United States and European allies that Russian troops are amassing along its eastern border. Russia engaged in a similar buildup before invading the Crimean region in 2014, when Biden was vice president under former President Barack Obama. It drew international outcry and sanctions.

In elaborating, Jake Sullivan, Biden’s national security adviser, told reporters at the White House that the United States would provide additional defensive resources to Ukraine beyond what Washington is already providing.

“We would fortify our NATO allies on the eastern flank with additional capabilities in response to such an escalation,” Sullivan said.

And in his first public comments since he spoke with Biden, Putin revealed Wednesday that Moscow would send ideas to Washington in the coming days on how to resolve their tensions.

“We agreed we will continue this discussion and we’ll do it in a substantive way. We will exchange our ideas in the very near future. Russia will draw up its ideas literally in the coming days, within a week we will give this to the U.S. side to consider,” Putin told reporters.

Furthermore, Putin said it was “provocative” to pose the question of whether Russia planned to attack Ukraine, and once again accused Kyiv and NATO of threatening Russia’s security. It would be “criminal inaction” on Russia’s part not to respond, he said.