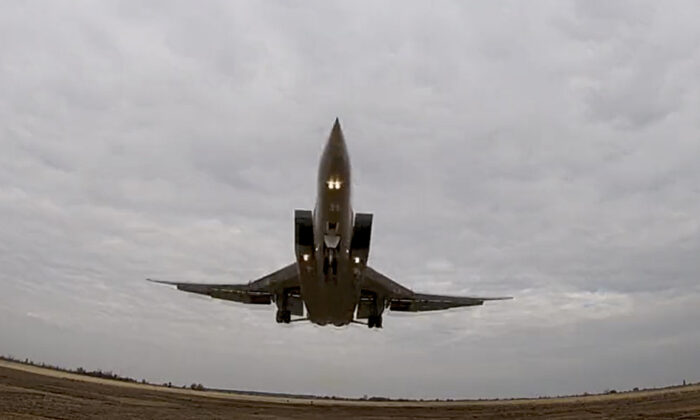 MOSCOW—Russia sent two nuclear-capable strategic bombers on a training mission over Belarus for a second straight day on Thursday in a strong show of Moscow’s support for its ally amid a dispute over migration at the Polish border.

The missions marked the second time in two days that Russia sent its nuclear-capable bombers into the skies over Belarus.

The Belarusian Defense Ministry said that such Russian bomber flights will be conducted on a regular basis.

The Russian military said the bombers spent over 4 1/2 hours in the air during the mission intended to buttress the countries’ alliance. It noted that the bomber patrol “wasn’t aimed against any third countries.”

Russia has strongly supported Belarus amid a tense standoff this week as thousands of migrants and refugees, most of them from the Middle East, gathered on the Belarusian side of the border with Poland in the hope of crossing into Western Europe.

The European Union has accused Belarus’ authoritarian President Alexander Lukashenko of encouraging illegal border crossings as a “hybrid attack” to retaliate against EU sanctions on his government for its crackdown on internal dissent after Lukashenko’s disputed 2020 reelection.

Belarus denies the allegations but has said it will no longer stop refugees and migrants from trying to enter the EU.

The Belarusian Defense Ministry accused Poland on Thursday of an “unprecedented” military buildup on the border, saying that migration control did not warrant the concentration of 15,000 troops backed by tanks, air defense assets, and other weapons.

“It looks more like forming a strike group of forces,” the ministry said, adding that the Polish military buildup prompted Belarus to respond with actions “both independently and within the existing agreements with our strategic ally,” a reference to Russia.

Russia and Belarus have a union agreement envisaging close political and military ties. Lukashenko has stressed the need to boost military cooperation in the face of what he has described as aggressive actions by NATO allies.

Lukashenko on Thursday called the Russian bomber flights a necessary response to the tensions on the Belarus-Poland border.

“Let them scream and squeak. Yes, those are nuclear-capable bombers, but we have no other choice,” the president, who has been in office since 1994, said.

“Military drills and bomber flights are part of training for joint action,” Ivashov was quoted by the Interfax news agency as saying. “It’s needed to avert a possible military conflict that could escalate into a big war. It’s necessary to demonstrate our readiness.”

Amid the tensions on the Belarus-Poland border, Russia has strongly backed Belarus, charging that the West destabilized the Middle East and therefore bears responsibility for migrants and refugees seeking safety in Europe.

At the same time, Moscow angrily rejected Poland’s claim that Russia has helped foment a situation with humanitarian as well as political dimensions.

Kremlin spokesman Dmitry Peskov noted the thousands of troops that have been deployed on either side of the Polish-Belarusian border and said “it’s a cause for deep concern of all sober-minded people in Europe.”

Asked about German Chancellor Angela Merkel’s request for Russian President Vladimir Putin to exert his influence on Belarus, Peskov responded that “Russia, like all other countries, is trying to help resolve the situation.” He said Putin has remained in contact with Lukashenko, but didn’t elaborate.

Russia’s national flag carrier, Aeroflot, responded to reports that the EU was mulling sanctions against the airline for its alleged involvement in bringing refugees and migrants to Belarus. Aeroflot strongly rejected the claim.

“The information about Aeroflot’s participation or assistance to organizing mass transportation of migrants to the territory of Belarus doesn’t conform to reality,” the airline said in a statement.

Aeroflot noted that it wasn’t conducting any regular or charter flights to Iraq or Syria and didn’t have any flights between Istanbul and Minsk.

Asked about the reports of possible EU sanctions against Aeroflot, Kremlin spokesman Peskov pointed to the airline’s denial of knowingly transporting Europe-bound asylum-seekers.

“Let hope that such mad ideas only exist in those media hoaxes,” he said in a conference call with reporters.