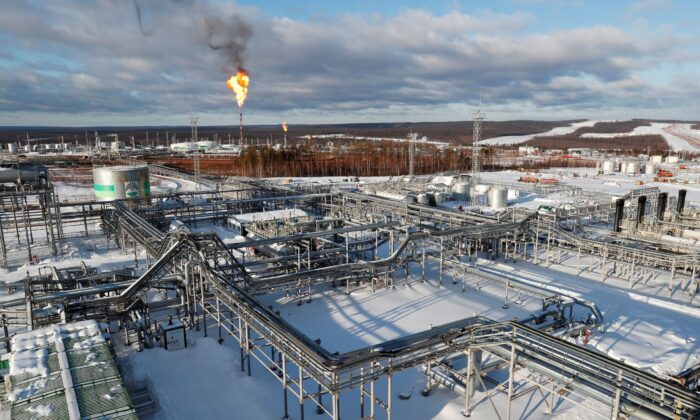 Russia’s crude oil is being sold at record discount rates as the country faces tough sanctions from Western nations following its invasion of neighboring Ukraine, but traders have remained cautious and stepped back from buying the discounted fuel.

“Russia-U.S. tensions over Ukraine have contributed to the collapse in Urals differentials,” consultant Facts Global Energy wrote in a note. “It seems that after many European refiners went on a Urals buying spree in December/January, those that have a choice are now shying away from Urals.” Multiple oil traders, oil tanker companies, and shipbrokers have temporarily ceased their Russia-related activity.

Countries like the United States, United Kingdom, Japan, and the EU region have all announced sanctions against Russia. More sanctions will possibly be announced in the coming days. Oil traders are choosing to avoid trading in Russian crude, fearful they might face the consequences of violating sanctions.

Igho Sanomi, founder of energy trading company Taleveras, is expecting restrictions against Russia to be “very deep,” according to WSJ. “We’re expecting most European banks will pull out of financing any commodities from Russia. Letters of credit are being stopped, financing in general toward Russian commodities is being stopped,” he said.

One major refiner from Europe told the media outlet that though they are a “big buyer” of Urals crude, they stopped buying about a month back.

Even if the United States does not impose any full-scale sanctions, European buyers will likely avoid Russian crude as long as tensions remain, according to oil analyst Alex Kavouris.

“I hear that refiners are stepping back from buying Urals, and many shipowners are saying they are unsure if they will call at Russian ports—Black Sea or Baltic,” a European refinery buyer said to S&P Global. One trader from the Middle East told the agency that such “extreme events” do not happen very often.

Upward pressure on Urals differentials also comes from the fear of possible disruption to shipping activity in the Black Sea. Some shipowners are said to be extremely cautious about traveling to terminals in the region.

While traders are shying away from Russian Urals, demand for crude oil from other parts of the world is rising, with places like the Middle East, West Africa, and Brazil standing to gain. Freight rates rose by 12 percent for cargoes from the Persian Gulf to the U.S. Gulf Coast on Thursday when compared to the day before.