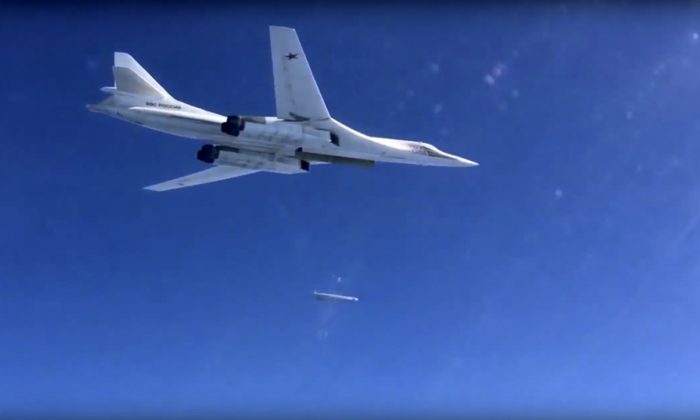 Russian President Vladimir Putin is seeking revenge on the group that killed the pilot that parachuted from a downed plane over Syria by launching at least a dozen bombs, a rebel leader said.

The region near the border of Turkey is controlled by Turkmen rebels, who took credit for shooting the pilot as he parachuted from a fighter jet that the Turkish Air Force hit.

Turkmen are ethnic Turks who have lived in parts of Syria, Iraq, and Iran since the 11th Century. They released a video of themselves standing over the body of the pilot and chanting “Allahu Akbar,” or God is Great in Arabic. Turkey has pledged support to the Turkmen, though they’re Syrian citizens.

The region they control was targeted by Russian forces on November 25, with at least 12 airstrikes hitting Latakia’s northern countryside, according to British-based Syrian Observatory for Human Rights.

Amidst the bombings were pro-government forces–who are currently aligned with Russia–clashing with rebel fighters, including al Qaeda’s Nusra Front and Turkmen insurgents.

A Turkmen commander said some of the missiles were launched from Russian warships in the Mediterranean. Russia announced via Russia Today that a missile cruiser had moved into the area and was equipped with long-range surface-to-air missiles.

Hassan Haj Ali, the head of Liwa Suqour al-Jabal, a rebel group operating in western Syria, told the group that there was heavy fighting in the area.

Another local rebel leader, Jahed Ahmad, said he Russians appear to be taking “revenge” for the plane’s downing by Turkey, a key backer of the rebels in the area, reported the Associated Press. He said via Skype that Russian jets were providing cover for advancing Syrian ground forces and their Lebanese Hezbollah allies.


A Turkish military source told Reuters that Turkish troops on the border were on alert on Wednesday after the bombardment began.

Two airmen parachuted out the plane, with rebels firing on both and killing one. The other was rescued by a group of Russian, Syrian, and Lebanese special forces.

Russia has, though, promised that the situation will not escalate to a “war,” and top Turkish officials have also emphasized they don’t want things to escalate.

At the same time, Putin has sent state-of-the art air defense missile systems to a Russian air base in Syria, just 30 miles from the border with Turkey.

Outside groups say many of the airstrikes have killed civilians, a key point of contention that’s been pegged as the reason Russia and the U.S. won’t partner in the region.

Airstrikes on Wednesday hit an aid convoy near the Syrian town of Azaz near the border with Turkey, but it wasn’t immediately clear whether the strikes came from Russian or Syrian warplanes.