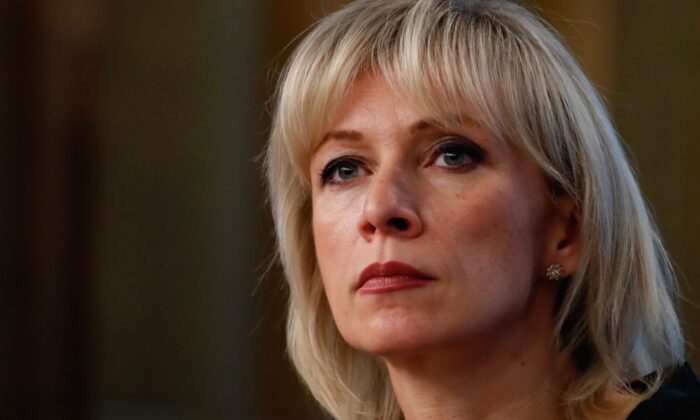 Ukraine has stationed about half of its army, amounting to well over 100,000 troops, in the war-torn Donbas region, a conflict zone in eastern Ukraine, a Russian foreign ministry spokeswoman alleged on Wednesday.

“According to some reports, the number of troops … in the conflict zone already reaches 125,000 people, and this, if anyone does not know, is half of the entire composition of the Armed Forces of Ukraine,” Maria Zakharov said during a news conference in Moscow, RT reported.

Ukrainian government forces have been battling Russia-backed separatists in the Donbas region since 2014. More than 14,000 people have died in the fighting. Kyiv has not immediately responded to Zakharov’s claims.

The diplomatic spokeswoman also said that the armed forces of Ukraine are “increasing [their] military force, pulling heavy equipment and personnel.” She also pointed at an increasing number of violations of a cease-fire in the east.

The accusations come at a time of high tension between the two countries, with NATO ministers holding a two-day meeting in Riga, Latvia—which started on Nov. 30—to discuss Russia’s military buildup close to Ukraine’s border.

Ukrainian Foreign Minister Dmytro Kuleba said on Wednesday he is set to make a request that NATO meet for a second day to discuss how to respond to the Russian buildup and avert potentially the most dangerous crisis in relations with Moscow since the Cold War.

Kyiv and Western officials expressed worry this month that a military buildup could signal plans by Moscow to invade its ex-Soviet neighbor. Moscow has repeatedly insisted it has no such intention and has accused Ukraine and its Western backers of making the claims to cover up their own allegedly aggressive designs.

On Wednesday, Russia again stressed it does not plan any attack on Ukraine, and assertions about a possible attack are lies, Russian state-owned news agency TASS reported, citing an official.

“There are no grounds for these assertions,” Russia’s Federation Council Speaker Valentina Matviyenko told reporters. “They are lies, nonsense and it is dirty politics.”

“Russia wasn’t going to, isn’t going to, and won’t attack Ukraine,” she went on to say, claiming that officials in Kyiv are using these assertions to divert attention from the country’s dire economic and social situation, accusing NATO of throwing their weight behind the notion of an external threat to Ukraine.

NATO, meanwhile, expressed concern while meeting in Latvia on Nov. 30 that Russia’s military buildup near its border with Ukraine is “unprovoked and unexplained,” saying Ukraine, which is not a NATO member, is a “highly valued partner” of the alliance and Russia will be sanctioned if it should renew any military aggression against the Eastern European nation.

“We see Russian military build-up, we see heavy armor, we see drones and combat-ready troops,” NATO’s Secretary-General Jens Stoltenberg said in a statement on Tuesday. “We call on Russia to be transparent because this is unprovoked and unexplained.”

In response, Russia’s President Vladimir Putin warned NATO against its own deployment of troops and weapons to Ukraine, saying it represents “a red line” for Russia and would trigger a strong response.

“If some kind of strike systems appear on the territory of Ukraine, the flight time to Moscow will be 7–10 minutes, and five minutes in the case of a hypersonic weapon being deployed,” the Kremlin leader said.

“What are we to do in such a scenario? We will have to then create something similar in relation to those who threaten us in that way. And we can do that now,” he said, pointing to Russia’s recent testing of a hypersonic weapon he said could fly at nine times the speed of sound.

EU and other Western leaders are involved in a geopolitical tug-of-war with Russia for influence in Ukraine and two other ex-Soviet republics, Moldova and Georgia, through trade, cooperation, and protection arrangements.