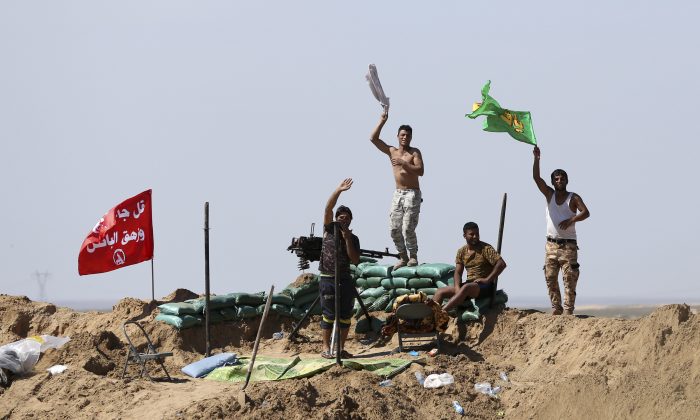 FILE - In this Wednesday, March 9, 2016 file photo, Popular Mobilization forces chant slogans against the Islamic State group as Iraqi Defense Minister Khaled al-Obeidi tours the front line in Anbar, Iraq. After months of losing ground in Iraq and Syria, the Islamic State group is showing signs of the wear and tear, with commanders on the ground saying they are seeing an increase in desertions. But the jihadis appear to be lashing back with more terrorist and chemical attacks. (AP Photo/Hadi Mizban, File)
Middle East

Russia Says Might Use Force to Cease-Fire Violators in Syria

MOSCOW (AP) — Russia on Monday warned the United States that it will start responding unilaterally to cease-fire violations in Syria if the U.S. refuses to coordinate rules of engagement against violators. The U.S. State Department insisted that Moscow and Washington were working constructively to monitor the truce and warned Russia against taking unilateral action.

The Russian military has accused the U.S. of dragging its feet on responding to Moscow’s proposals on rules for joint monitoring of the Syria cease-fire and response to violations. It said that further delays are leading to civilian casualties.

Lt. Gen. Sergei Rudskoi of the Russian General Staff said in a statement on Monday that if the U.S. fails to respond to its proposals on a joint response, the Russian military will have to start unilaterally using force against those who break the cease-fire, starting Tuesday.

The Russian Foreign Ministry issued a separate but similar statement.

In Washington, State Department spokesman John Kirby said the U.S. and Russia were working together to collect and analyze information about cease-fire violations, and that any unilateral Russian action to punish transgressors goes against “the spirit of the cessation of hostilities.”

“There has been coordination,” Kirby told reporters, saying these matters “continue to be discussed in a constructive manner.” But he said no action has been taken against truce violators thus far.

“Our expectation is that Russia will refrain from unilateral actions,” Kirby stressed, saying the cessation of hostilities is holding despite some breaches. There is “no reason for anybody to say that there needs to be unilateral action taken.”

In Geneva, the U.N. special envoy for Syria, whose office is helping monitor cease-fire violations in Syria, said he was “extremely supportive” of U.S. and Russian cooperation to help bolster a peace process for the war-torn country. Staffan de Mistura pointed to the unprecedented “operation center” that is designed to help the two powers’ military and civilian experts to “cooperate in containing the crisis.”

“The moment that they (the U.S. and Russia) don’t talk substantively, we go back to the past,” de Mistura said, “and we can’t afford it — and they know it too.”

The cease-fire that began on Feb. 27, brokered by Russia and the U.S., has helped significantly reduce hostilities for the first time during the five-year conflict that has killed a quarter-million and turned millions into refugees. The Islamic State group and the al-Qaida-linked Nusra Front have been excluded from the truce.

Russian President Vladimir Putin last week recalled some Russian warplanes from Syria, but said the action against those groups will continue.