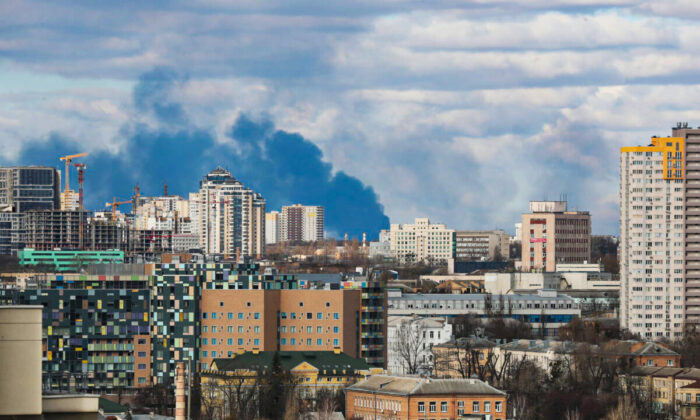 Smoke rising after shelling on the outskirts of the city is pictured from central Kyiv, Ukraine, on Feb. 27, 2022. (Irakli Gedenidze/Reuters)
Russia-Ukraine War

Russia said it deployed a large number of strikes against Ukranian assets overnight, reaching hundreds of targets, including what was described as a logistics base containing large numbers of Western-provided weapons.

In a statement on April 18, the Russian Ministry of Defense said that air-launched missiles destroyed 16 Ukrainian military facilities, including command posts, ammunition warehouses, and a fuel depot in the regions of Kharkiv, Zaporizhzhia, Donetsk, and Dnipropetrovsk.

Ministry of Defense spokesman Igor Konashenkov later told state-run media that a Russian strike at a logistics facility in the western Ukraine city of Lviv destroyed a large number of weapons provided by the United States and European allies.

“On the morning of 18 April, missiles fired by the Russian Aerospace Forces [aircraft] delivered a precision strike against the 124th Joint Logistics Center of the Logistics Forces Command of the Ukrainian Armed Forces. The logistics center and a large batch of foreign weapons delivered to Ukraine over the past six days from the United States and European countries was destroyed,” he said.

Regional officials in Lviv told The Washington Post that at least seven people died when missiles struck the city on April 18. Those were the first in Lviv since the invasion began in late February.

The Russian defense ministry also spoke of destroying 12 Ukrainian strike drones and tanks in other parts of Ukraine and of using Iskander missiles to destroy four arms and equipment depots in the Luhansk, Vinnytsia, and Donetsk regions. In all, Moscow said its overnight strikes were aimed at about 108 targets where it believed Ukraine had its forces and weapons.

The defense ministry also said Russian artillery had struck 315 Ukrainian military targets overnight and that air defense systems had been used to bring down two MiG-29 fighters and one SU-25 plane.

In recent days, Russia has been focused on trying to take full control of the Ukrainian port city of Mariupol, which has been besieged for weeks.

Also on April 18, Russian President Vladimir Putin said that U.S. and European sanctions against him and other government assets have failed.

“The intention was to quickly shatter the financial-economic situation in our country and provoke panic on the markets, the banking system’s collapse, and major shortages of goods in stores,” he said at a conference, according to Interfax. “We can say confidently now that this policy in relation to Russia has failed, and the economic blitzkrieg strategy has proved unsuccessful.”