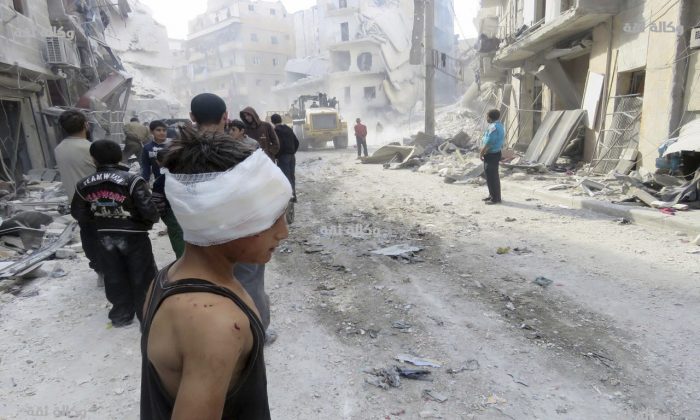 An injured child after airstrikes in Aleppo, Syria, on Nov. 16, 2016. (Thiqa News via AP)
International

MOSCOW—A Russian airstrike in northern Syria this week killed at least 30 members of an al-Qaida-linked group, including some of its leaders, the Russian military said Thursday.

The statement comes amid a new wave of airstrikes in the war-torn country, with the besieged rebel-held part of the city of Aleppo facing its third consecutive day of heavy bombardment by Syrian President Bashar Assad’s forces.

The Russians, who announced the new offensive in Syria this week, have denied bombing the rebel enclave. At least 59 people were killed across northern Syria in the first two days of the offensive, including besieged neighborhoods of Aleppo, as well as the surrounding countryside and the nearby rebel-held province of Idlib.

Russian Defense Ministry spokesman Maj. Gen. Igor Konashenkov said the strike targeting al-Qaida took place in Idlib on Tuesday. It was launched from Russia’s aircraft carrier, which has been deployed to the Mediterranean, and hit the al-Qaida-linked militant group now known as Fatah al-Sham Front, he said.

The strike marked the combat debut of the Admiral Kuznetsov, Russia’s only aircraft carrier. According to Russian intelligence reports, it was confirmed that three prominent leaders of the al-Qaida-linked group—Muhammad Helala, Abu Jaber Harmuja and Abul Baha al-Asfari—were among those killed, Konashenkov added. He said al-Asfari had overseen the group’s attempts to break the siege of Aleppo.

Russia has said its air raids and missile strikes have only been targeting Idlib province and the central province of Homs to root out militants of the ISIS terrorist group and the al-Qaida-linked group.

On Wednesday, bombs hit an Aleppo district that houses several medical facilities, including the central blood bank, and forced Syrian staff and patients in the only remaining pediatric hospital to cower in a basement as buildings collapsed around them.

The Russia-declared offensive came hours after President Vladimir Putin and U.S. President-elect Donald Trump discussed Syria in a phone call and agreed on the need to combine efforts in the fight against what the Kremlin called their No. 1 enemy—”international terrorism and extremism.”

Months of negotiations between Moscow and President Barack Obama’s administration have failed to cement a long-term cease-fire in Aleppo, which has become the focus of the war between Assad and rebels fighting to topple him.

Al-Qaida’s Syrian affiliate is fighting alongside the rebels, but the ISIS terrorist group has no presence in Aleppo.