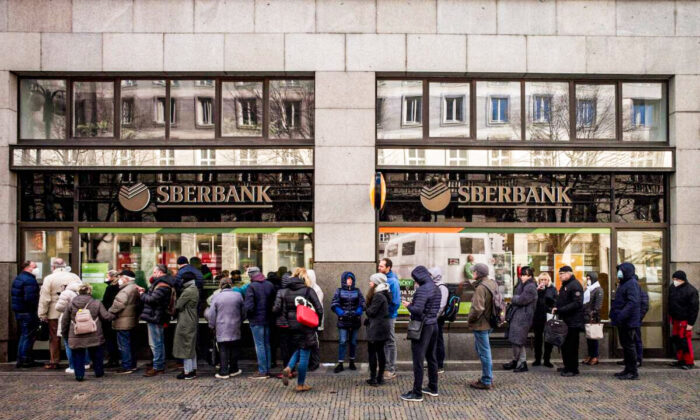 People queue outside a branch of Russian state-owned bank Sberbank to withdraw their savings and close their accounts in Prague on Feb. 25, 2022, before Sberbank closed all its branches in the Czech Republic later in the day. (Michal Cizek/AFP via Getty Images)
Russia-Ukraine War

Russia Reveals Exact Amount of Reserves Frozen by US and Allies

Russia’s finance minister revealed that about $300 billion of Russia’s foreign exchange and holdings have been seized amid sanctions from Western nations.

“We have a total amount of reserves of about $640 billion, about $300 billion of reserves are now in a state in which we cannot use them,” Finance Minister Anton Siluanov told state-run media on Sunday.

Siluanov further said that more pressure could be applied to the Russian economy due to increased pressure from the West on China.

“We have part of our gold and foreign exchange reserves in the Chinese currency, in yuan. And we see what pressure is being exerted by Western countries on China in order to limit mutual trade with China. Of course, there is pressure to limit access to those reserves,” he said.

“We are communicating directly, privately to Beijing, that there will absolutely be consequences for large-scale sanctions, evasion efforts, or support to Russia to backfill them,” Sullivan told CNN.

China is Russia’s top export market after the European Union. Russian exports to China were worth $79.3 billion in 2021, with oil and gas accounting for 56% of that, according to China’s customs agency.

The comments came after the United States, the European Union, the United Kingdom, and several other countries have imposed harsh sanctions against Russia, including asset freezes, bans on products, and more. Last week, President Joe Biden announced the United States would suspend importing Russian oil, although it reportedly makes up only a small portion of domestic usage.

The Russian Central Bank also has been targeted via sanctions, and the Bank for International Settlements suspended Russia from using its services. At the same time, a large number of U.S. and Western companies said they would not do business with or ship products to Russia following its Feb. 24 invasion of Ukraine.

In an unprecedented move, the Moscow stock exchange said in a statement Saturday that Russia’s primary stock market will remain closed next week until March 18. The stock market has not opened since Feb. 25.

On March 10, longtime Kremlin spokesman Dmitry Peskov, who himself was sanctioned by the United States in recent days, told reporters that Russia’s “economy is experiencing a shock impact now and there are negative consequences” but “they will be minimized.”

While the situation is turbulent, Moscow can take measures to stabilize the country’s economy, Peskov remarked, without elaborating.

“This is absolutely unprecedented. The economic war that has started against our country has never taken place before. So it is very hard to forecast anything,” he remarked.