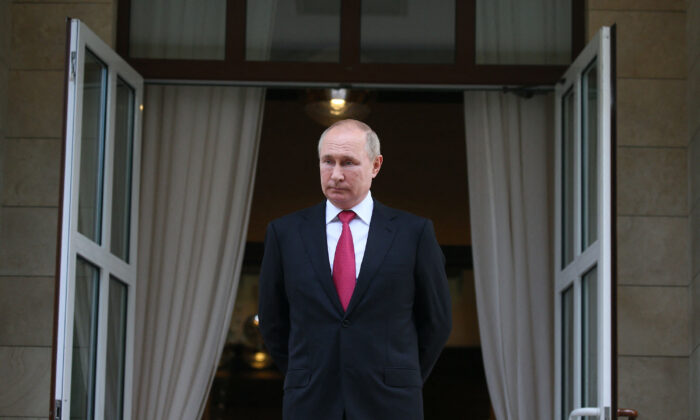 Russian President Vladimir Putin at the Bocharov Ruchei state residence after a meeting with his Turkish counterpart in Sochi, Russia, on Sept. 29, 2021. (Vladimir Smirnov/Pool/AFP/Getty Images)
Europe

Russian officials on Jan. 27 said Moscow doesn’t see many reasons for the United States and NATO to accept its demands amid heightened tensions near the Ukrainian border, coming after the Department of State provided a series of proposals to the Kremlin.

Both the United States and NATO sent written responses to Russia over its security demands that would bar Ukraine from joining NATO or hosting U.S. military bases. In 2014, Russia annexed the Crimean Peninsula and began supporting separatist rebel groups in the Donbas.

“There is not much reason for optimism,” Kremlin spokesman Dmitry Peskov told reporters in response to the State Department and NATO responses. “It cannot be said that our considerations were taken into account or that any willingness to take into account our concerns was demonstrated.”

“No matter how diametrically opposed our views sometimes are, dialogue is always needed,” he said.

The written U.S. and NATO responses were not made public, but both rejected Moscow’s demands while expressing willingness to engage on other issues such as arms control, confidence-building measures, and limits on the size and scope of military exercises.

Western countries have warned of economic sanctions on Russia if it invades Ukraine, building on measures imposed since 2014 when Moscow annexed Crimea and Russian-backed separatists began fighting government forces in eastern Ukraine.

Nonetheless, Russia considers the idea of an armed conflict between Ukraine and Russia “unacceptable,” said Alexey Zaytsev, deputy spokesperson for the Russian Foreign Ministry, on Jan. 27.

“We have repeatedly stated that our country is not going to attack anyone,“ Zaytsev said. “We consider unacceptable even the idea of a war between our peoples. However, the overseas superiors of Ukraine think differently. It seems they intend to currently adhere to the scenario they invented.”

Zaytsev said the best way to reduce tensions is for NATO to withdraw forces from eastern Europe, but he also sought to quash fears of a looming invasion.

The TASS news agency cited a senior Russian foreign ministry official, Vladimir Ermakov, as saying a nuclear missile crisis between Moscow and Washington is unavoidable without measures to ensure restraint and predictability.

Ermakov said Moscow believed Washington was preparing to deploy short- and intermediate-range missiles to Europe and the Asia-Pacific region.