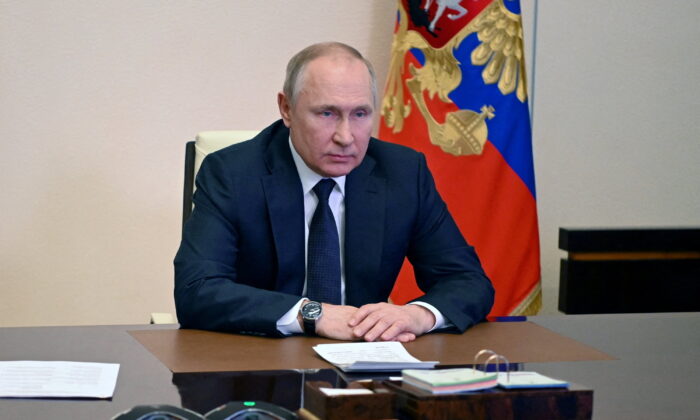 Russian President Vladimir Putin chairs a meeting with members of the Security Council via a video link at the Novo-Ogaryovo state residence outside Moscow, on March 3, 2022. (Sputnik/Andrey Gorshkov/Kremlin via Reuters)
Russia-Ukraine War

Russia has issued a decree effectively removing protections for patent holders who are registered in countries that are hostile to Moscow.

The decree, issued this week, also states that Russia can remove such protections for patent holders who do business or hold the nationality of those countries it deems as “unfriendly” according to The Washington Post.

Such countries include all the 27 EU member countries plus Monaco, Switzerland, Norway, Iceland, and San Marino, as well as the United States, the United Kingdom, and more, and the decree was adopted by Russia on Saturday, EURACTIV reported.

The decree is titled, “On Amendments to Clause 2 of the Methodology for Determining the Amount of Compensation Paid to a Patent Owner When Deciding to Use an Invention, Utility Model or Industrial Design without His Consent, and the Procedure for Its Payment” and was published on March 6.

It effectively means that Russian entities could not be sued for damages if they were to use certain patents, even without permission to do so.

A patent grants exclusive rights for an invention, meaning that it cannot be commercially produced, used, distributed, imported, or sold by anyone else without consent to do so from the patent owner.

Josh Gerben, an intellectual property lawyer in Washington, told The Washington Post that the decree could have an impact on Western investment in Russia, while a similar decree on trademarks could allow Russian companies to exploit American brand names that have pulled the plug on their business operations in the country in the wake of its invasion of Ukraine.

The Kremlin has thus far not issued any such decree lifting protections on trademarks, but Russia’s Ministry of Economic Development said last week that authorities are considering “removing restrictions on the use of intellectual property contained in certain goods whose supply to Russia is restricted,” Tass reported.

“This will smooth out the impact on the market of breaks in supply chains, as well as the shortage of goods and services that arose due to new sanctions by Western countries,” the ministry said.

“The measure will allow, on the one hand, to organize the production and use of technologies that were presented in products that were deprived of Western companies our citizens, on the other hand, the measure legalizes the import of such products from third countries,” the ministry said, according to Tass.

A document (pdf) issued by the ministry earlier this month outlines a proposed law that would introduce “a compulsory licensing mechanism for computer programs and databases.”

The Epoch Times has contacted Russia’s Ministry of Economic Development for comment.

“It’s just another example of how [Putin] has forever changed the relationship that Russia will have with the world,” Gerben said.

The decree comes as dozens of countries across the United States and the rest of the world move to cut ties with Russia and suspend business operations in the country, while Western officials have levied heavy sanctions on Russia’s imports and exports as well as its finances.

On Wednesday Coca-Cola and PepsiCo became the latest big-name brands to pull the plug on business operations in the country.