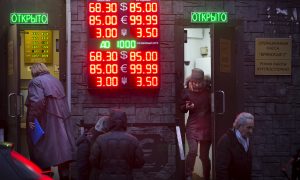 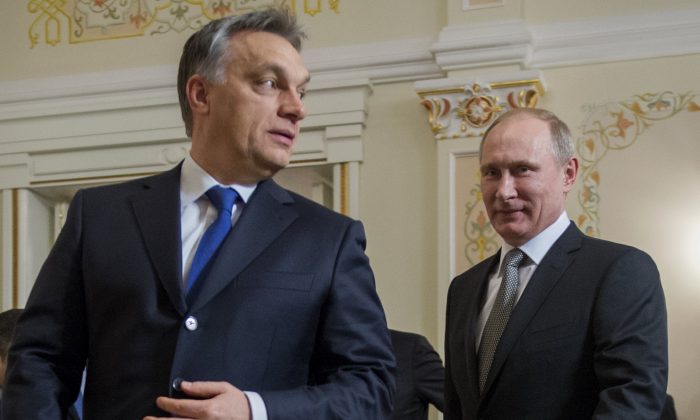 As the diplomatic chill over Ukraine deepens, the Kremlin seems keener than ever to enlist Europe’s far-right parties in its campaign for influence in the West, seeking new relationships based largely on shared concern over the growing clout of the EU.

Russia fears that the EU and NATO could spread to countries it considers part of its sphere of influence. And it has repeatedly served notice that it will not tolerate that scenario, most recently with its Ukraine campaign.

Europe’s right-wing and populist parties, meanwhile, see a robust EU as contrary to their vision of Europe as a loose union of strong national states. And some regard the EU as a toady to America.

The fact that many of Moscow’s allies are right to far-right reflects the Kremlin’s full turn. Under communism, xenophobic nationalist parties were shunned.

Now they are embraced as partners who can help further Russia’s interests and who share key views — advocacy of traditional family values, belief in authoritarian leadership, a distrust of the U.S. and support for strong law-and-order measures.

Statements by leading critics of the EU, or euroskeptics, reflect their admiration of the Kremlin.

National Front founder Jean-Marie Le Pen told The Associated Press this month that France and Russia “have a communality of interest.” Daughter Marine Le Pen, party president and a strong contender for the French presidency in 2017, envisions a Europe stretching “from the Atlantic to the Urals” — a “pan-European union” that includes Russia and is supported by other right-wing parties.

Nationalist Hungarian Prime Minister Viktor Orban perceives prevailing winds as “blowing from the East” and sees in Russia an ideal political model for his concept of an “illiberal state.” The head of Britain’s euroskeptic Independence Party, Nigel Farage, has said Putin is the world leader he most admires — “as an operator, but not as a human being.”

Among other Moscow regulars from euroskeptic parties across Europe are members of Hungary’s anti-Semitic Jobbik and Austria’s Freedom Party.

Jobbik parliamentarian Bela Kovacs — his detractors call him “KGBela” — is under investigation in Hungary for allegedly spying for Russia. While in Moscow recently, Freedom Party firebrand Johann Gudenus accused the European Union of kowtowing to “NATO and America” and denounced the spreading influence of the “homosexual lobby” in Europe.

Shunned at home by the establishment, many on the political fringes are eager for the chance to hobnob with Russian powerbrokers, gain air time on RT television, Russia’s international answer to CNN, or to act as monitors when Moscow seeks a fig leaf to legitimize elections in recently annexed Crimea.

For them, “the benefit is that they can receive diplomatic support from a very high level from a superpower,” says Peter Kreko of Hungary’s Political Capital research institute.

Marine Le Pen describes it as “a perfectly legal loan that we will reimburse perfectly legally,” saying the party turned to Russia after being rejected by Western banks. But the transaction has galvanized fears among the National Front’s opponents of increased Kremlin influence, with the Socialists calling for an inquiry.

Links between Russia and the right predate the Ukraine conflict. A 2005 U.S. diplomatic cable made public by Wikileaks noted close ties between Bulgaria’s extreme-right Ataka party and the Russian Embassy in Sofia. And Joerg Haider, the late leader of Austria’s Freedom Party, helped powerful Russian businessmen with residency permits more than a decade ago in exchange for what Austrian authorities now suspect were close to 1 million euros worth of bribes.

Nor was Moscow’s search for allies in Europe always restricted to anti-EU figures. Shekhovtsov sees Putin’s friendships with German ex-Chancellor Gerhard Schroeder and Italy’s former Premier Silvio Berlusconi as useful for the Kremlin before foreign policy differences that culminated in the Ukraine crisis made the Russian leader unwelcome in most European capitals.

Now the diplomatic gloom is settling in, and Moscow may have few alternatives to courting Europe’s EU malcontents in hopes that their strong domestic and EU election showings this year will help further its own interests.

Of the 24 right-wing populist parties that took about a quarter of the European Parliament’s seats in May elections, Political Capital lists 15 as “committed” to Russia.

Many owe their popularity to voter perceptions that EU-friendly parties in power are to blame for the continent’s economic woes — a view that could grow if the downturn persists.

“What Russia is saying is, ‘It’s fine for you to be the way you are,'” says analyst Melik Kaylan, in a study for the Institute of Modern Russia. “‘You’re authoritarian. We’re authoritarian. Let’s work together against the West.'”

From The Associated Press. AP writers John-Thor Dahlburg in Brussels, Veselin Toshkov in Sofia, Bulgaria, and Pablo Gorondi in Budapest, Hungary, also contributed to this report.