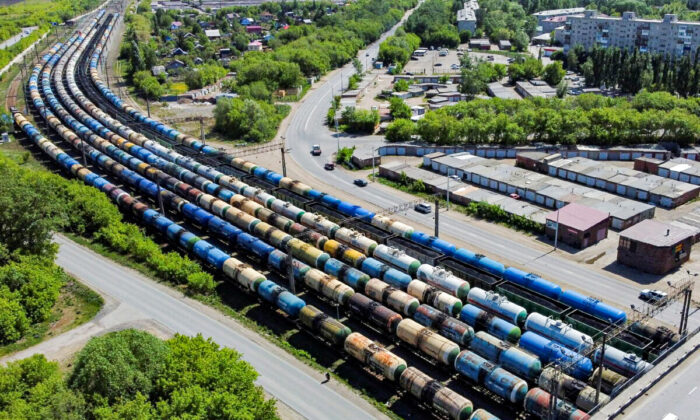 “Any actions to impose a price cap will lead to deficit on [initiating countries’] own markets and will increase price volatility,” Shulginov said, according to Reuters. On Sept. 2, the G7 pledged to cap the price of Russian oil in international markets. The cap will be imposed by banning shipping firms and insurance companies from aiding Russia to sell oil above a set price limit.

The price cap is designed to “reduce Russian revenues and Russia’s ability to fund its war of aggression while limiting the impact of Russia’s war on global energy prices,” the group said in a statement, according to Fox. The G7 is made up of United States, Britain, Germany, France, Italy, Japan, and Canada.

The announcement did not provide details about the level of the price cap. The initial cap will be decided based on a wide range of technical inputs. The policy is expected to come into effect on Dec. 5. In response, the Kremlin vowed to act against firms that follow the G7 policy.

“Companies that impose a price cap will not be among the recipients of Russian oil,” Kremlin spokesman Dmitry Peskov told reporters in a conference call, according to Reuters. “We simply will not cooperate with them on non-market principles.”

Russia was studying how the oil price cap will affect its economy, he added, while warning that the G7 decision will result in “a significant destabilization of the oil markets.”

Since the Russian invasion of Ukraine, Moscow increasingly has been relying on Asian markets to buy its oil. India and China are the biggest customers from the region.

The primary reason Asian nations are interested in Russian oil is the cheaper price, which at one time was being offered $30 lower than Brent crude.

For India, Russia is reportedly providing a $20 discount per barrel, according to the BBC. India’s purchases of Russian Urals and East Siberia Pacific Ocean (ESPO) blends have risen this year.

Since March, Beijing has been buying both ESPO and Urals in larger quantities. Sri Lanka, struggling with an economic crisis, is also buying discounted Russian oil.

In late August, Sandiaga Uno, Indonesia’s minister of tourism, revealed that Moscow was offering oil at a 30 percent discount to international market prices. The country’s president was considering the offer, but there have been concerns about potential U.S. embargoes.

Despite Russia’s push for selling more oil in Asia, exports have fallen during recent weeks, compared to the sales volume seen in the initial months after the Ukraine conflict began.