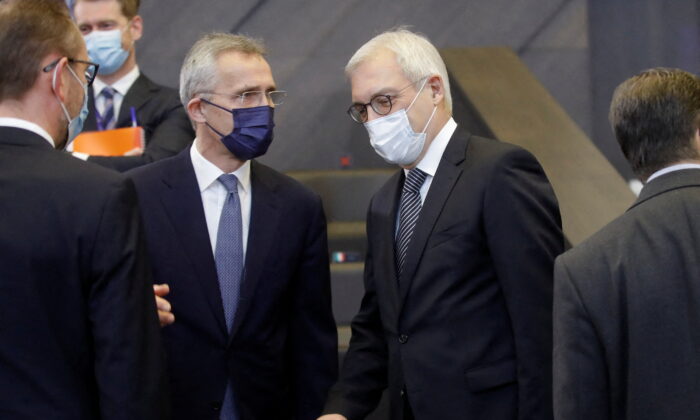 A Russian delegation met with members of the North Atlantic Treaty Organization (NATO) in Brussels on Jan. 12 to discuss security proposals amid Western concerns that Moscow may be planning to invade Ukraine.

The first Russia-NATO Council (RNC) meeting since July 2019 ended with the conclusion that there are significant differences between NATO and Russia that “will not be easy to bridge.”

NATO Secretary-General Jens Stoltenberg received Russian Deputy Foreign Minister Alexander Grushko at allied headquarters for the high-profile talks. The alliance’s chief said “it is a positive sign” that the 30 NATO members and Russia sat around the same table and engaged in substantive topics, although it appears more dialogue is needed.

“NATO allies are ready to meet again with Russia to have discussions in greater detail, to put concrete proposals on the table, and to seek constructive outcomes,” he told reporters in Brussels.

Members of the alliance have said they would consider the Jan. 12 talks a success if Russia agreed to hold further talks. NATO is ready to negotiate with Moscow on increasing openness around military drills to avoid accidental clashes that could spark conflict, as well as arms control regarding missiles in Europe.

But allies pointed out that many of Russia’s demands, laid out in two draft treaties in December, are unacceptable, including calls to scale back the alliance’s activities to 1990s-era levels and promising not to take in new members.

U.S. Deputy Secretary of State Wendy Sherman reaffirmed on Jan. 12 that any European nation should have the right to join NATO—despite Moscow’s demands against expansion.

“I reaffirmed the fundamental principles of the international system and of European security: Every country has the sovereign right to choose its own path,” Sherman said in a statement on Twitter.

As the Russian delegation held talks on Jan. 12, the Russian military announced in a Jan. 11 statement that it conducted live-fire exercises involving 3,000 servicemen and 300 armored vehicles near Ukraine’s border.

“We are not negotiating from a position of strength; there is not, and nor can there be, any place for ultimatums here,” Peskov said in Moscow as the talks were getting underway in Brussels.

But he said pan-European security was at a critical point and the West needed to respond to Russia’s concerns about NATO activities in former communist countries it sees as its backyard.

Earlier this week, U.S. and Russian negotiators kicked off the first of three key talks. The Jan. 10 meeting aimed at deescalating ongoing tensions over Ukraine concluded with no major breakthrough immediately in sight, according to senior diplomats on both sides.

“Unfortunately, we have a great disparity in our principled approaches to this,” Russian Deputy Foreign Minister Sergei Ryabkov said during a news conference on Jan. 10. “The U.S. and Russia in some ways have opposite views on what needs to be done.”

Sherman said on a conference call with reporters that some of the guarantees proposed by Russia are “simply nonstarters for the United States,” while Ryabkov thought the discussions were “optimistic”—he noted that he doesn’t see an understanding from the U.S. side that satisfies Moscow.

Ryabkov again laid out Moscow’s three demands on Jan. 9, saying they’re seeking no further NATO expansion, no missiles on Russia’s borders, and for NATO to no longer have military exercises, intelligence operations, or infrastructure outside of its 1997 borders.

The third round of talks will continue on Jan. 13 in Vienna at the Organization for Security and Cooperation in Europe (OSCE), a broader body where Russia, the United States, and Europeans are represented.