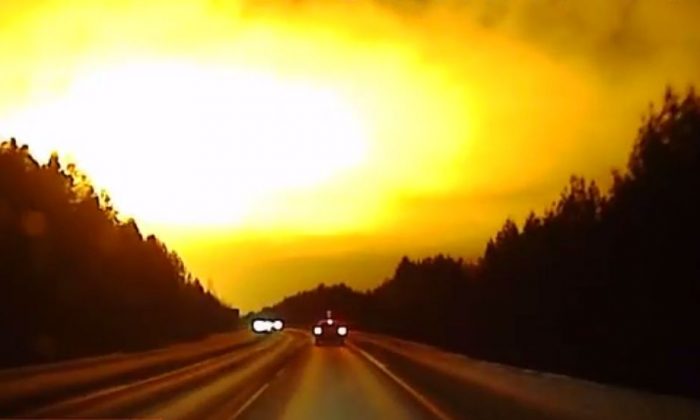 Something that appears to be a meteor exploded over western Siberia, according to reports this week. (YouTube)
Science

A fireball was seen over western Siberia, according to reports on Tuesday. Some have claimed it’s a meteor, while others aren’t so sure.

The explosion was captured on a dashcam, showing the night sky being lit up by the blast.

Jalopnik notes that the blast took place over Sverdlovsk Oblast, which is near Chelyabinsk–where a meteor exploded last year and injured 100 people.

According to NBC, Marco Langbroek of the Dutch Meteor Society said, “I doubt this one is a meteor. To me, it looks like a fire or series of small explosions and subsequent large explosion or flash fire reflecting on a cloud deck.”

NBC notes that a chemical plant is located nearby. There were also reports of the military setting off ammunition.

In an attempt to explain the phenomenon, a Redditor wrote: “Astronomer here! Probably too late for the party on this one, but this just looks like a particularly bright fireball meteor. These are actually not as rare as you would think- NASA has a network in the USA to look for them, for example.”

“Specifically, if I had to bet, today is the peak of the Leonid meteor shower. The Leonids are a strange beast of a shower whereby some years you get storms that produce thousands of meteors due to particularly dense debris, some years are years were nothing happens out of the ordinary. This was supposed to be one of the ordinary years (~10/hour from that- you get one meteor a minute just from normal debris) but that doesn’t mean you can have larger chunks as part of that 10/hour.”

When the meteor exploded over Chelyabinsk last year, it raised concerns about the possibility of an asteroid hitting the Earth.

“Something like Chelyabinsk, you would only expect every 150 years on the basis of the telescopic information. But when you look at our data and extrapolate from that, we see that these things seem to be happening every 30 years or so,” researcher Peter Brown, from the University of Western Ontario, Canada, told the BBC last year.

He said that a system needs to be put in place to warn residents.

“Having some sort of system that scans the sky almost continuously and looks for these objects just before they hit the Earth, that probably is something worth doing,” he said. “In the case of Chelyabinsk, a few days’ to a week’s warning would have been valuable.”