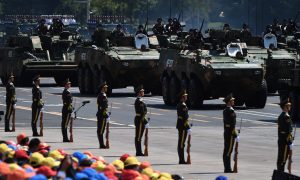 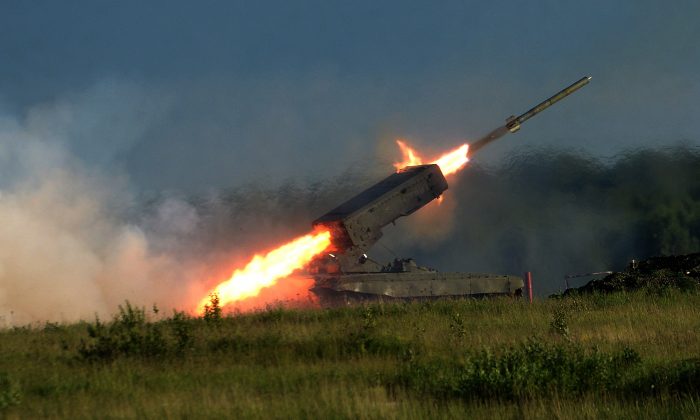 A Russian Heavy Flamethrower System TOS-1 fires during the 'Army-2015' international military forum in Kubinka, outside Moscow, on June 16, 2015. Russia is one of the few countries that still uses flamethrowers. (Vasily Maximov/AFP/Getty Images)
International

Most of the world’s militaries have moved on from flamethrowers, with a belief that the weapons are ineffective in modern combat and not worth the bad press.

One of the few exceptions to this, however, is the Russian military. They view flamethrowers as an important part of their arsenal, and have specific units that still specialize in lighting their enemies on fire.

A recent U.S. Army report notes that flamethrowers are still “an important asset in the Russian maneuver commander’s toolbox.” It cites a full report on Russia’s use of flamethrowers from the Foreign Military Studies Office, an open source research organization of the U.S. Army.

The report isn’t written in a critical tone. It says that at a time when other armies are reevaluating the value of flamethrowers, Russia has demonstrated their “usefulness for urban and mountain warfare, bunker busting, and clearing light infantry.”

It adds that the Russian military has found so much use for flamethrowers that they’ve expanded their flamethrower units with “at least four” new regiments in 2014.

While Russia has found value in flame weapons, it may also be validating their use by militaries of other nations.

The basic reasoning is simple. If troops are taking fire from a building or a bunker, they can either make a risky move to flush out the enemy—or they can just set the whole place ablaze.

For the Russians, the second option is preferable.

According to the report, Russia still sees flamethrowers as a “mature weapon system that fills specific capabilities gaps in the Russian Armed Forces force structure.”

It notes, as Russia experiments with “new forms and methods” of war, in urban warfare environments such as Eastern Ukraine, “urban warfare will likely continue to be a high priority for development, and so will Russia’s flame wielding” troops.

Russia has used the weapons in Afghanistan, and in the First and Second Chechen Wars. The report says Russia allegedly fielded a new type of flamethrower, the MRO Borodach (Small Caliber Infantry Flamethrower), in Ukraine in 2013. It has also used vehicle flame weapons in Syria.

The flamethrower of choice for the Russians is the Rocket Propelled Infantry Flame Thrower, also called the “Shmel” (“Bumblebee”). It’s much different from the type used by most nations in World War II. It’s basically a rocket launcher that releases a flammable cloud, which it then sets on fire.

When the flame from the weapon ignites, it sucks in nearby oxygen, which causes a “powerful burn” and an explosion with a “tremendous amount of force,” according to the report.

The damage caused by the weapons isn’t always from the flame itself. According to the report, “the primary cause of damage is caused by the vacuum created by the sucking of the oxygen out of the area, and the overpressure caused from the blast.” This can collapse lungs and cause “severe internal injuries.”

Russia also fields more powerful flamethrowers on vehicles, known as the Heavy Flame Thrower System (TOS-1), which the Russians call “Buratino” (“Pinocchio”). They sometimes use these weapons in place of artillery, despite them having a shorter range and being “substantially less accurate.”

The TOS-1 has a devastating effect, however. The thermobaric rockets produce shortwaves the report says have an effect “that has been described as appearing as a nuclear explosion.” Russia is fielding heavy flamethrowers in Syria.

The Fading of Flamethrowers

Flamethrowers actually have a long history in military use. Diagrams suggest the Greeks used them for naval combat in the 1st century AD, and several other armies, including that of the Byzantine Empire, learned from the Greeks. A Chinese military text from around 1040 AD, “Complete Essentials for the Military Classics,” also has designs for a flamethrower.

During World War I, the German army was the first to field flamethrowers, and other nations followed suit. Their use continued during World War II, and into later conflicts.

The United States stopped using flamethrowers in 1979, not necessarily because of the horror the weapons inflict, but more because of they were deemed less effective in modern combat.

The problem with the weapons was that troops had to lug around fuel backpacks that weighed up to 50 pounds, and the fuel only lasted about nine seconds. Troops carrying them were also prime targets, and their carriers were slowed by their weight.

In the late 1960s, the United States actually fielded a replacement flamethrower, the M-202 Flame Assault Shoulder Weapon (FLASH). It was similar to what the Russians currently use, and moved to flame rockets instead of the older firehose-like setup.

Not long after the United States stopped using flamethrowers, Geneva passed standards on military use of flamethrowers in December 1983, with the Convention on Certain Conventional Weapons. One of the main shifts was that it banned use of the weapons in areas near concentrations of civilians.

Despite the shifts though, the weapons were never entirely banned—you can actually buy consumer flamethrowers in the United States relatively cheaply and with few legal hoops to jump through.

Their strategic value also never entirely went away—and the report notes Russia has continued viewing the weapons as an important part of its military.