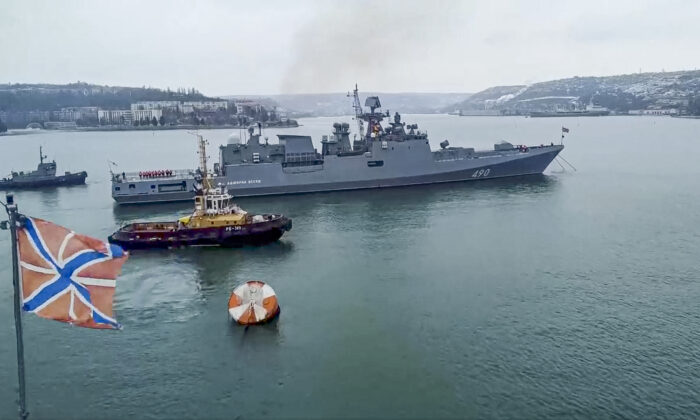 Russia deployed more troops and fighter jets to Belarus on Jan. 26 as part of a major military exercise between the two allied nations—while more than 20 Russian warships departed their naval bases for drills in the Black Sea.

The Russian Ministry of Defense said in a statement that it relocated crews of Su-35S multirole fighter aircraft of the Eastern Military District to Belarus as part of the “Allied Resolve-2022” joint exercises that will be held early next month.

Upon arrival at Belarusian airfields, the crews of the Su-35S advanced combat aircraft “will go on air defense combat alert as part of a check of the Union State’s integrated air defense system,” the ministry said.

“During the exercise, measures will be taken to strengthen the protection of the State Border to prevent the penetration of armed groups of militants, to block the channels for the delivery of weapons and ammunition, as well as to search, block, and destroy illegal armed formations,” it stated.

Russia’s latest flurry of naval and airforce exercises comes one day after U.S. President Joe Biden said he would consider personal sanctions on Russian President Vladimir Putin if Russia were to invade Ukraine. It also comes as officials opened talks in Paris over the tensions on the Russia–Ukraine border.

Russia has repeatedly insisted it doesn’t plan to invade neighboring Ukraine, but it has issued a list of demands that includes NATO promising to not allow Ukraine to become a member state of the alliance.

On Jan. 25, Russia warned it would quickly take “retaliatory measures” if the United States and its allies reject its proposed security demands. Some demands have been labeled by NATO as “nonstarters.”

“If the West continues its aggressive course, Moscow will take the necessary retaliatory measures,” Russian Foreign Minister Sergey Lavrov said. “We won’t allow our proposals to be drowned in endless discussions.”

The Kremlin’s point man on Ukraine was due to meet officials from France, Germany, and Ukraine for “Normandy format” talks in Paris, against the backdrop of a Russian military buildup near Ukraine that has sparked fears of an invasion.

The Normandy talks to end the war in eastern Ukraine between Kyiv and Russia-backed separatists have met for years without real progress, but the Jan. 26 talks may be seen as a positive sign of diplomacy taking place despite the soaring tensions.