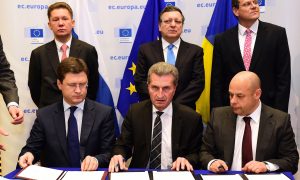 MOSCOW—The Russian gas company Gazprom halted supplies to neighboring Ukraine on Wednesday after the collapse of pricing talks, a company official said — but an EU official said the dispute would not affect the flow of Russian gas to Europe.

“Gazprom is not going to send gas to Ukraine at any price without the advance payment,” Miller said in comments carried by Russian news agencies.

The latest energy dispute comes as Russian support to separatist rebels in eastern Ukraine has strained the relations between Russia and Ukraine. Still, the two nations have had years of disputes over Russian gas going to Ukraine and heading onto Europe through Ukrainian pipelines. These disputes have even left other European nations without heat in the dead of winter.

This time, Ukraine has been buying less and less gas directly from Russia.

Russian and Ukrainian energy ministers failed to reach an agreement Tuesday on future supplies at talks mediated by EU officials. Russia offered Ukraine a price of $247 per cubic meter, a $40 discount. Ukraine wanted a $100 discount.

Russian Energy Minister Alexander Novak insisted the discount that Ukraine is asking for would put the cost of supplying Ukraine below the market rate.

But Ukrainian Energy Minister Volodymyr Demchyshyn says the Russian discount isn’t enough and that Ukraine will buy gas from other nations starting July 1 until an agreement is reached with Russia. Gas consumption is low at this time of year, allowing Ukraine to bargain for better terms.

“We are being offered, categorically, a price which is higher than that of the reserve supply from Europe,” Demchyshyn said in a statement Wednesday. “Russian gas at the eastern border should be cheaper because (the price) does not include the cost of transit.”

Ukraine has said it has found cheaper supplies from other European nations, which resell the gas they have gotten from Russia. Moscow has described these so-called reverse flows as illegal. Ukraine imported a third of its total gas from Russia in the first six months of this year, the national pipeline operator said Wednesday.

Ukraine, which is struggling to balance its budget amid protracted fighting against Russia-backed separatists in the east, relies heavily on gas for its metals and machinery industries.

The European Commission Vice-President Maros Sefcovic, who mediated the Russia-Ukraine gas talks, said gas supplies to the EU and Ukraine are “not in danger.”

“(Today) we are much better prepared in Europe for any problems with energy supplies,” he said — due to the increased ability of European countries to move gas where it’s needed via “reverse flows.”

Sefcovic said both Russia and Ukraine have asked the EU to come up with further proposals. He said technical experts would meet again in late August, followed by political talks in September.