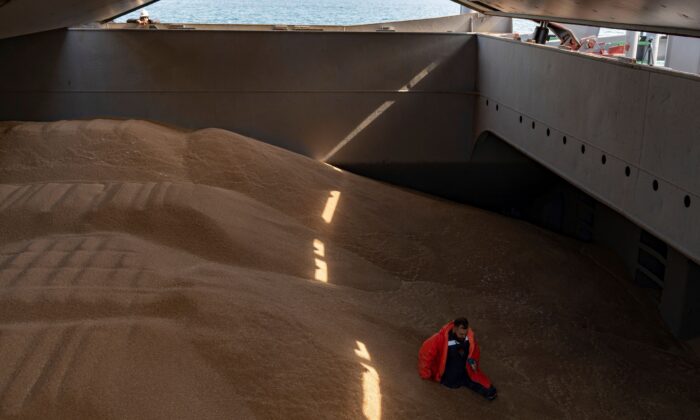 A crew member prepares a grain analysis for a control made by members of the Joint Coordination Center (JCC) onboard the Barbados-flagged ship "Nord Vind" coming from Ukraine, loaded with grain and anchored in Istanbul, on Oct. 11, 2022. (Yasin Akgul/AFP via Getty Images)
By Adam Morrow

Russia has announced its withdrawal from a United Nations-brokered agreement with Ukraine that had guaranteed the safe shipment of Ukrainian wheat through the Black Sea.

The move came in response to a drone attack on Russian naval vessels docked in the Crimean port of Sevastopol, for which Moscow has blamed Ukrainian forces working in tandem with British military “specialists.”

“Taking into account the act of terrorism committed by the Kyiv regime with the participation of British specialists … Russia is suspending its participation in the agreements on the export of agricultural products from Ukrainian ports,” the Russian Defense Ministry said in a statement.

In the early hours of Oct. 29, Russian naval ships in Sevastopol, where Russia’s Black Sea fleet is headquartered, reportedly came under heavy attack by multiple air and water-borne drones. According to Russian sources, a minesweeping vessel was slightly damaged in the attack, although no casualties were reported.

“The Russian side cannot guarantee the safety of civilian dry cargo ships participating in the Black Sea initiative and suspends its implementation from today for an indefinite period,” the Russian Foreign Ministry stated.

Brokered this summer by the U.N. and Turkey, the initiative aimed to ensure the continued export of wheat from three Ukrainian seaports. Under the deal, a joint coordination center was established in Istanbul—staffed by U.N., Turkish, Russian, and Ukrainian officials—to inspect cargo ships and coordinate their movement through the Black Sea.

Since the deal went into effect in July, more than 9 million tons of Ukrainian wheat have reportedly been exported to various buyers abroad. According to the U.N., the arrangement helped reduce international food prices by some 15 percent since their peak in March.

As a result of Russia’s withdrawal, more than 200 cargo ships are now “effectively blocked” from leaving Ukraine, the Ukrainian Infrastructure Ministry said on Oct. 30.

On that day, NATO called on Russian President Vladimir Putin to reactivate the initiative and “stop weaponizing food.”

In response to claims that the deal’s suspension would lead to food shortages, Russian agriculture minister Dmitry Patrushev said that Moscow was ready, with Turkey’s help, to supply poor countries with 500,000 tons of free wheat over the next four months.

On Oct. 31, the Turkish Defense Ministry said that defense chief Hulusi Akar had held urgent talks with his Russian and Ukrainian counterparts in hopes of reviving the stalled initiative.

Officials in Kyiv, meanwhile, have neither confirmed nor denied their country’s involvement in the Sevastopol attack.

Andriy Yermak, chief of staff for the Ukrainian presidency, accused Russia of carrying out “fictitious terrorist attacks on its own facilities.”

But Moscow insists that Ukrainian forces, with British assistance, carried out the attack on its Black Sea fleet.

“The preparation of this terrorist act, and the training of servicemen of the Ukrainian 73rd Special Center for Naval Operations, was carried out under the guidance of British specialists located in the [southern Ukrainian] town of Ochakiv,” Russia’s Defense Ministry stated.

In a notable escalation, the ministry also claimed that the same unit of “British specialists” was responsible for last month’s brazen attack on the Nord Stream gas pipeline, which links gas fields in Russia to northern Europe.

“According to available information, members of this unit of the British Navy took part in the planning, provision, and implementation of the terrorist attack in the Baltic Sea on Sept. 26 of this year, blowing up the Nord Stream 1 and Nord Stream 2 gas pipelines,” the ministry stated.

It didn’t provide any evidence for its claims or elaborate on the “information” it claimed to possess in relation to the September attack.

“To detract from their disastrous handling of the illegal invasion of Ukraine, the Russian Ministry of Defense is resorting to peddling false claims of an epic scale,” the UK Defense Ministry stated.

“This invented story says more about arguments going on inside the Russian government than it does about the West.”

In late September, the strategic pipeline was intentionally breached in Swedish and Danish waters, prompting a flurry of accusations between European capitals and Moscow. While the latter has strongly hinted at Western involvement, it has refrained—until now—from explicitly accusing any state actors.

On Oct. 14, Sweden abruptly halted joint investigations with Denmark and Germany into the sabotage, citing concerns over “national security.” A week later, a Kremlin spokesman cryptically said that the “truth” about the Nord Stream incident would “surprise” Europeans if it were ever made public.

Moscow has reportedly requested a meeting of the U.N. Security Council to discuss the allegations.