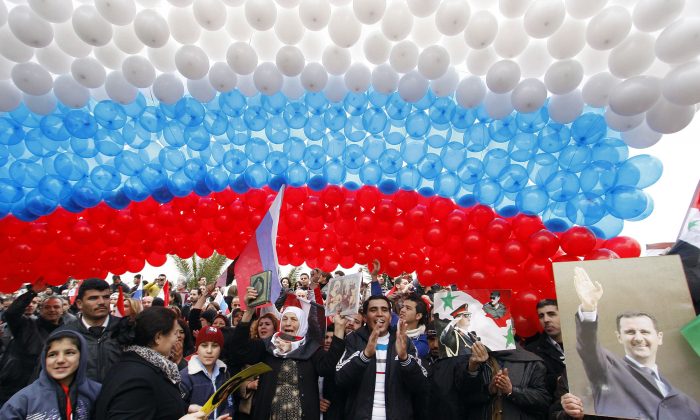 FILE - In this Feb. 7, 2012, file photo, pro-Syrian government protesters gather under a large Russian flag made with balloons as they cheer a convoy believed to be transporting Russian Foreign Minister Sergey Lavrov in Damascus, Syria. In ramping up its military involvement in Syria's civil war, Russia appears to be betting that the West, horrified by Islamic State's atrocities, may be willing to tolerate Syrian President Bashar Assad for a while, perhaps as part of a transition. (AP Photo/Muzaffar Salman, File)
International

BEIRUT—In ramping up its military involvement in Syria’s civil war, Russia appears to be betting that the West, horrified by the spread of ISIS and an escalating migrants crisis, may be willing to quietly tolerate President Bashar Assad for a while, perhaps as part of a transition.

The logic is that prioritizing the fight with the jihadi fighters means accepting Assad as the less bad option despite his own brutal acts, and might produce a more effective and coordinated fight in the air and on the ground.

It also would reorganize an awkward situation in Syria, whereby the Assad regime and the U.S.-led coalition are actively fighting the same group but do not act like allies—as opposed to coordination the coalition maintains with the central Baghdad authorities in the parallel fight against ISIS in neighboring Iraq.

Russia has no such complications.

A longtime backer of Syria’s government, Moscow has recently increased its military activity in Syria, sending military advisers, technicians, and security guards with the main goal of setting up an air base near the coastal town of Latakia, a stronghold of the Syrian president. There are reports that the Russians had flown in troops and modular housing units. And Israel’s defense minister, Moshe Yaalon, said he expects Russians to be fighting alongside Assad’s troops.

Even more than the concurrent assistance by Iran and proxy Shiite militias on behalf of Assad, Russian military intervention could potentially be a game changer in the Syrian conflict, tipping the scales in a spectacularly ruinous civil war that has killed a quarter of a million people and created a massive global humanitarian crisis.

The degree and speed of the impact depends on scale. And there is also a chance that the Russian efforts could prolong the bloodshed, counteracting the various U.S. efforts to train and arm palatable rebel groups.

Russia claims it is mainly motivated by fighting ISIS. But U.S. President Barack Obama cast the buildup as an effort to prop up Assad.

Samantha Power, the U.S. ambassador to the United Nations, warned that “doubling down” on the Assad regime “is not a winning strategy.” In an interview with CNN, she said, “Assad cannot be part of a solution … because he gasses his people, uses barrel bombs against them, and is responsible for one of the worst torture campaigns in modern memory.” Even if “all you cared about is (Islamic State) this is not going to bring peace or succeed in defeating terrorism,” she said.

Despite such statements, evidence suggests Russian President Vladimir Putin believes the West can be swayed, if only informally. Moscow may also hope that a creatively constructive role in Syria might help improve ties with the West, ravaged in the wake of the Ukrainian crisis.

“Putin has proven an excellent tactician on the Syrian crisis, and he currently likely senses a chance to increase Russia’s prestige and influence with relatively little pushback from the international community,” said Ayham Kamel, Middle East and North Africa director of the London-based Eurasia group.

“Putin probably realizes that the U.S. and Europe are no longer enthusiastic about regime change in Syria and are more focused on the threat of the Islamic State [ISIS],” he added.

Indeed, European leaders have recently begun voicing what many say the Obama administration will not say publicly.

Indeed, European leaders have recently begun voicing what many say the Obama administration will not say publicly.

British Foreign Secretary Philip Hammond told Parliament’s Foreign Affairs Committee that his government was willing to accept “compromises” with Russia and Iran that could see Assad play a role “for some months” in a transition process.

A day earlier, Austria’s foreign minister was even more direct, saying the West should involve Assad in the fight against ISIS. Sebastian Kurz’s comments came during a state visit to Tehran, and reflected what some officials have been saying privately for months.

“One should not forget the crimes that Assad has committed, but also not forget the pragmatic view of the fact that in this fight we are on the same side,” Kurz said.

A true Russian buildup could complicate future American military action in Syria, including a safe zone along the Turkish border, which has been discussed with Ankara.

While neither the United States nor its Saudi allies currently preoccupied with the war in Yemen are likely to openly confront the Russian deployment, both are likely to respond by stepping up their aid to anti-Assad rebels.

It also carries risks for Russia, where memories of its 1980s struggles against Islamic fundamentalists in Afghanistan still sting: an increased Russian presence may itself become a target for Syrian opposition and jihadi elements.

Syrian opposition member Badr Jamous warned that rebels will regard any foreign fighters deployed on the side of the government as a legitimate target.

Moscow may also be trying to ensure it has a say in a future political settlement, as ideas percolate around the region. There are reports that Egypt, an erstwhile ally of Russia and China, is considering a rapprochement with Assad.

The Russian moves follow the successful conclusion of the Iran nuclear deal, in which Moscow also played a key role. Both countries have a huge investment in the Syrian regime, which along with being a client state provides Russia with its only remaining Mediterranean and Middle Eastern base in the port of Tartus.

A series of major defeats for the Syrian military may have hastened Russia’s decision to intensify its activity in Syria. Extremists are estimated to be in control of half the ravaged country, while rebels backed by the United States, Saudi Arabia, and Turkey have made striking gains in the country’s north and south, putting pressure on Assad’s coastal heartland.

There is speculation about whether the Russians may convince Assad to accept a face-saving transition process that incorporates the Western-backed rebels into a power sharing deal.

But several Lebanese politicians with close links to the Syrian government who frequent Damascus said the Syrian leadership is confident of the support of its Russian and Iranian friends and does not feel threatened enough to negotiate.

The extent of Moscow’s involvement in Syria will likely remain sketchy until Putin speaks at the U.N. general assembly later in September.

“We have seen indications in recent days that Russia has moved people and things into the area around Latakia and the air base there that suggests that it intends to establish some sort of a forward air operating base,” Davis said.

He said the United States has concerns about ensuring that any Russian military air operations not come into conflict with U.S. and coalition airstrikes that are being conducted in other parts of Syria against ISIS targets and that “things that continue to support the Assad regime … are unhelpful and risk adding greater instability to an already unstable situation.”

“Already a lethal cauldron of regional proxy warfare, Syria will further deteriorate if the U.S. and Russia use both sides of the civil war as leverage against the other,” it said.