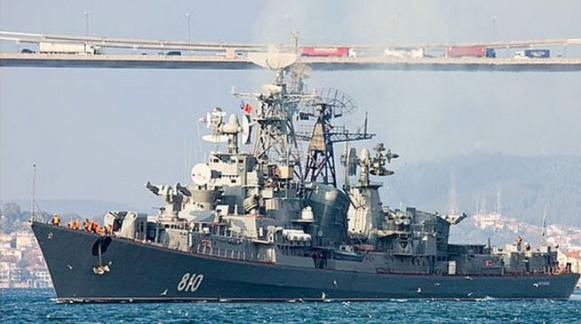 Russia says the crew of one of its destroyers was forced to fire a warning shot to prevent a collision with a Turkish boat.

The Russian Ministry of Defense said in a statement that the shot, fired on December 13, came from the patrol ship Smetlivy and prevented a collision with a Turkish vessel that appears to be a fishing boat.

The situation went down in the Aegean Sea about 14 miles from the Greek island of Limnos.

The shot was only fired after the Turkish ship didn’t respond to hails, signal lamps, or flares, the ministry said.

The shot did not hit the boat, and the Turkish vessel immediately changed course, moving by the destroyer at a distance of about 590 yards.

The ministry soon summoned a military attache from the Turkish embassy in Moscow to address the incident.

The warning shot is the latest in a series of maneuvers between Russia and Turkey following the downing of a Russian bomber near the Turkey-Syria border on November 24.

Both sides still dispute what exactly happened in the lead-up to the incident, which included the killing of two Russians–a pilot and marine–by rebels in Syria. Russia says the plane didn’t cross into Turkish airspace, but Turkey said it did.

After the plane was shot down, both countries bolstered their armies in the border area, with Russia moving more ships into the region. Russia is operating in Syria as an ally to the president.