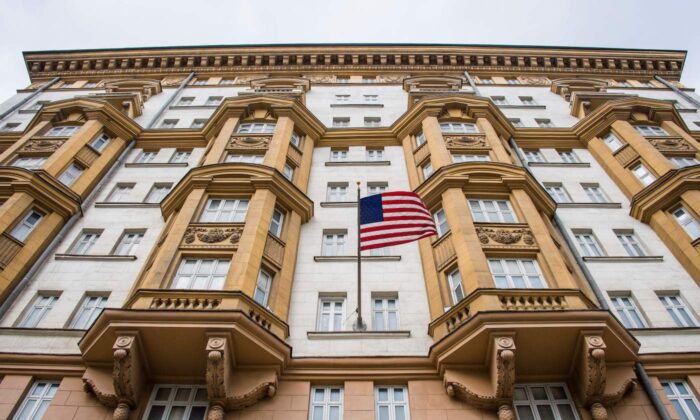 Russia Expels US Diplomats in Retaliatory Move Amid Ukraine Invasion

Moscow on Wednesday announced that it will expel U.S. diplomats from Russia.

Russia’s Ministry of Foreign Affairs said the U.S. embassy in Moscow was handed a list of its diplomats that were declared “persona non grata.”

“The American side was told very firmly that any hostile U.S. actions against Russia would provoke a decisive and comparable response,” the statement said, Russia’s state-run agency Interfax reported.

Russian state-run media said the move was in response to Washington’s decision last month to expel 12 Russian diplomats at its U.N. mission in New York. The United States accused the expelled individuals of “espionage activities.”

“The U.S. has informed the Russian Mission that we are beginning the process of expelling 12 intelligence operatives from the Russian Mission who have abused their privileges of residency in the U.S. by engaging in espionage activities that are adverse to our national security,” the spokeswoman for the U.S. mission to the U.N., Olivia Dalton, announced in a statement at the time.

Russia’s ambassador to the United States, Anatoli Antonov, denounced the decision last month as a “hostile move” by Washington. He said the move was a cause of “deep disappointment and absolute rejection” in Russia.

It was not immediately clear how many or which U.S. diplomats would be expelled as part of the Kremlin’s decision on Wednesday.

A spokesperson for the U.S. State Department confirmed the news that the U.S. embassy in Moscow received a list of diplomats declared “persona non grata” from the Russian Ministry of Foreign Affairs on March 23.

“This is Russia’s latest unhelpful and unproductive step in our bilateral relationship … Now more than ever, it is critical that our countries have the necessary diplomatic personnel in place to facilitate communication between our governments,” the spokesperson said, Reuters reported.

Russian President Vladimir Putin launched what he called a “special military operation” in Ukraine on Feb. 24, saying he aims to “de-militarize” and “de-Nazify” the country. The Kremlin has asked Ukraine for reassurance that it won’t seek NATO membership.

Ukrainian President Volodymyr Zelenskyy said on March 17 his priorities for potential peace talks with Russia are “the end of the war, security guarantees, sovereignty, restoration of territorial integrity,” and “real guarantees for our country, real protection for our country.”

The Epoch Times has contacted the U.S. State Department for additional comment.