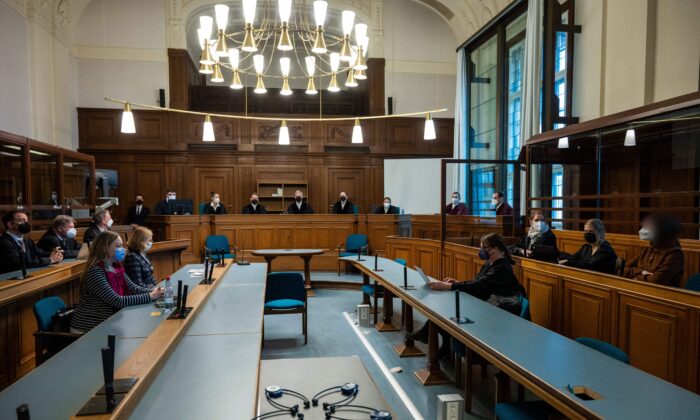 Process participants are pictured at the courtroom, where a trial took place against a Russian defendant, Vadim Krasikov, of gunning down 40-year-old Georgian national Zelimkhan "Tornike" Kavtarashvili, in Berlin, on Dec. 15, 2021. (Christophe Gateau/Pool/AFP via Getty Images)
Europe

MOSCOW—Russia on Monday ordered two German diplomats to leave in response to the expulsion of two Russian envoys after a German court’s ruling that blamed Moscow for the killing of a Chechen man in Berlin two years ago.

Moscow has angrily rejected the Berlin court’s verdict and the Russian Foreign Ministry summoned the German ambassador Monday to inform him about the diplomats’ expulsion in what it said was a “symmetrical response to the unfriendly decision by the German government.”

The ministry warned that Russia will continue to respond in kind to any “potential confrontational moves by Berlin.”

Judges at Berlin’s regional court on Wednesday convicted 56-year-old Vadim Krasikov of killing Zelimkhan “Tornike” Khangoshvili, a 40-year-old Georgian citizen of Chechen ethnicity. They ruled that Krasikov had acted on the orders of Russian federal authorities, who provided him with a false identity, a fake passport, and the resources to carry out the killing.

The brazen daylight hit near Berlin’s Kleiner Tiergarten park on Aug. 23, 2019 sparked outrage in Berlin and prompted the German government to expel two other Russian diplomats at the time—a move Russia swiftly reciprocated.

The German Foreign Ministry denounced the Russian move as “completely unfounded” and noted that the Russian diplomats’ expulsion last week was “an appropriate reaction” to the court’s verdict.

“The German government strives for an exchange with the Russian Federation on the basis of international law and mutual respect,” it said, adding that the Russian move “puts additional strain on this relationship.”