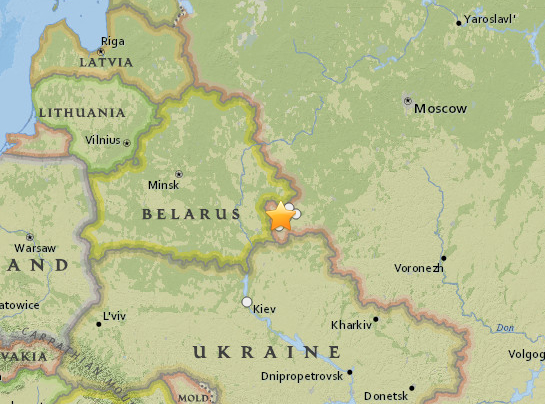 Official Says There was No Russia Earthquake Near Border with Ukraine, Belarus

The U.S. Geological Survey on Friday retracted a post that said there was 6.8-magnitude earthquake near the Russia-Ukraine border.

“The Russia earthquake appeared on the USGS website while a series of strong temblors were taking place in the middle of the Atlantic Ocean, some 700 miles (1,100 km) south of Greenland.”

In the retracted post, the USGS said the quake hit about 6 kilometers west-northwest of Klintsy.

Meanwhile, the Obama administration on Friday accused Russia and pro-Russian separatists of violating “the spirit” of a peace deal for Ukraine with weapons shipments and intensified fighting before a ceasefire takes effect this weekend.

The allegations came as fierce fighting surged in eastern Ukraine as the separatists mounted a major, sustained offensive to capture the strategic railway hub of Debaltseve. Clashes and artillery strikes killed at least 15 people across the region before the truce is to take effect Sunday. The violence dimmed already faint hopes for the peace accord sealed Thursday in the Belarusian capital of Minsk by the leaders of Russia,Ukraine, Germany and France.

“We are very concerned about continued fighting along and beyond the line of contact, including in heavily populated civilian areas, and reports of additional resupplies of tanks and missile systems coming across the border from Russia in the past few days,” State Department spokeswoman Jen Psaki told reporters. She added that the U.S. had intelligence that Russia is preparing to send a large shipment of supplies to the rebels.