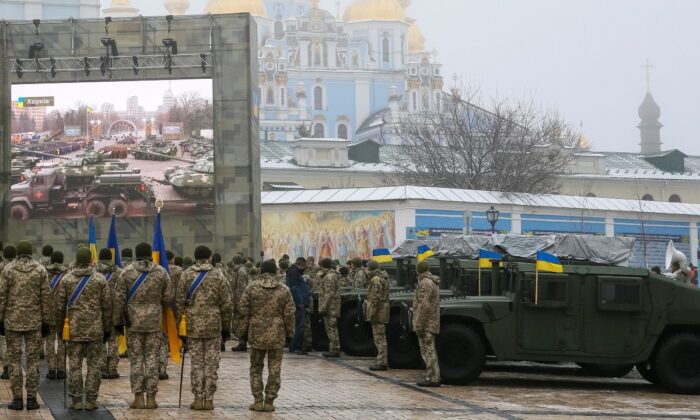 Ukrainian servicemen attend a rehearsal of an official ceremony to hand over tanks, armored personnel carriers and military vehicles to the Ukrainian Armed Forces as the country celebrates Army Day in Kyiv, Ukraine, on Dec. 6, 2021. (Gleb Garanich/Reuters)
International

Many national security officials are urging the Biden administration to flatly reject Russian proposals to restrict further NATO expansion, but critics say that bluster from Washington is pushing the United States closer to conflict with a nuclear-armed power.

Russia’s Foreign Ministry published a document on Dec. 17 that includes demands that it has made to the United States and NATO. Tensions have mounted in recent weeks over Ukraine. Russian President Vladimir Putin has reportedly amassed more than 100,000 soldiers near the border shared by the two nations.

According to the Russian News Agency TASS, Putin’s proposal calls on the United States to “take measures to prevent further eastward expansion of the North Atlantic Treaty Organization (NATO) and deny accession to the Alliance to the former USSR republics.”

The deal would also require that the United States refrain from building military bases in former Soviet states that aren’t NATO members and from using their infrastructure for military activity. In turn, Moscow is offering to refrain from deploying its armed forces and weapons into regions where such deployment could be viewed as a threat to the other side’s security—except deployment on one’s national territory—according to TASS.

Russia’s proposal has been roundly criticized by many in Washington. The Foundation for Defense of Democracies said on Dec. 22 that Putin is attempting to “revive the Cold War by redrawing the lines of Europe.”

“The Biden administration and NATO should reject any negotiations that involve taking away the right of states to choose their own security arrangements,” the national security think tank stated.

NATO and U.S. officials have also expressed strong opposition to the proposal. White House press secretary Jen Psaki said on Dec. 14 that the United States “will not compromise” on Ukraine’s ability to join NATO, and U.S. Undersecretary for Political Affairs Victoria Nuland said earlier this month that such proposals are “unacceptable.”

But some people are pushing for the Biden administration to meet Putin at the negotiating table.

Anti-interventionists argue that Russia has much more to lose than the United States when it comes to Ukraine’s potential admission into NATO, as Russia’s naval base in Sevastopol, Crimea, is a key factor to it being able to maintain its status as a global power. Russia has always maintained a red line against Ukraine joining NATO—Russia’s deputy foreign minister reportedly threatened military action earlier this month against NATO if Ukraine were to be admitted as a member—due in large part to security concerns over the warm-water port.

“The fact is, we lack the interest and will to defend Ukraine and Georgia sufficient to make threats to do so credible,” Defense Priorities Policy Director Benjamin Friedman said in a Dec. 17 statement, in response to Russia’s proposal. “Admitting Ukraine and Georgia into NATO would raise questions about whether other NATO commitments are equally unserious and therefore do more to erode existing NATO commitments than meaningfully extend them.”

Friedman said the United States and NATO shouldn’t accept Russia’s deal wholesale, but that the proposal serves as a basis for talks.

“Expressing willingness to discuss these matters with Russia may itself be useful,” Friedman said. “Acknowledging Russia remains a great power with interests beyond its borders—that spheres of influence are a fact of international politics we can lament but cannot wish away—could help lower the temperature and the odds of an invasion of Ukraine.”

The anti-interventionists may be getting their way. While many U.S. officials have made strong statements against Russia, President Joe Biden publicly ruled out military intervention or placing troops on the ground in Ukraine, even if Russia invades. Senior State Department officials also reportedly have said behind closed doors that it’s unlikely that Ukraine will join NATO within the next decade.

Biden’s willingness to negotiate has reportedly angered NATO allies. But Daniel McAdams, the executive director of the Ron Paul Institute for Peace and Prosperity, told The Epoch Times that the president’s statesmanship could help the United States avoid war.

“I think there’s some clear evidence that Biden is walking back from the brink. He said NATO is not in the cards for Ukraine for the moment, and U.S. troops in Ukraine is not on the table,” said McAdams, who worked as a human rights monitor and election observer in Eastern Europe in the 1990s before serving as former Rep. Ron Paul’s (R-Texas) foreign policy advisor from 2001-2012.

“I think there’s some realization of the need to walk back.”