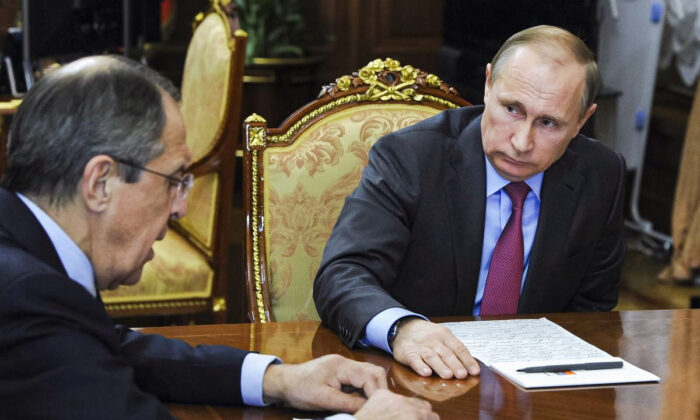 Retaliatory visa measures are being developed in Russia for citizens from “unfriendly” nations, Foreign Minister Sergei Lavrov said on March 28 as another top Kremlin official said U.S. President Joe Biden’s recent comments are a “cause for concern.”

During public comments, Lavrov didn’t provide details about the countries that would be targeted, although he did single out the United States and its allies.

“Additionally, a draft presidential decree is currently being developed on retaliatory visa measures in connection with the unfriendly actions of a number of foreign states,” Lavrov said during a meeting in Moscow, according to state-run media. “This act will introduce a number of restrictions on entry to the territory of Russia.”

Some measures are being developed to “respond to unfriendly actions by the United States and its satellites,” Lavrov added.

Over the past weekend, White House officials, including Secretary of State Antony Blinken, disputed claims that Biden was suggesting a regime change in Russia.

Russia and Ukraine said their delegations arrived in Turkey on March 28 for a new round of talks to begin on March 29. Ukrainian officials have recently suggested that Russia could be more willing to compromise having encountered stiff Ukrainian resistance and heavy Russian losses.

Russia’s military also signaled last week that it would concentrate on expanding territory held by separatists in eastern Ukraine, a month after having committed the bulk of its huge invasion force to a failed assault on Kyiv.

Ukraine President Volodymyr Zelenskyy, meanwhile, told journalists on March 28 that he would be willing to meet with Putin in person but suggested the meeting occur outside of Russia.

“We must come to an agreement with the president of the Russian Federation, and in order to reach an agreement, he needs to get out of there on his own feet … and come to meet me,” he said, according to an Associated Press translation of his comments.

But Ukraine said it saw no sign that Russia had given up a plan to surround the capital, where the mayor, former heavyweight boxer Vitali Klitschko, said 100 people had been killed, including four children, and 82 multi-story buildings had been destroyed. It wasn’t possible to verify the figures.

Neither side has budged over Russia’s territorial demands, including Crimea, which Moscow seized and annexed in 2014, and eastern territories known as the Donbas, which Moscow demands that Kyiv cede to separatists.