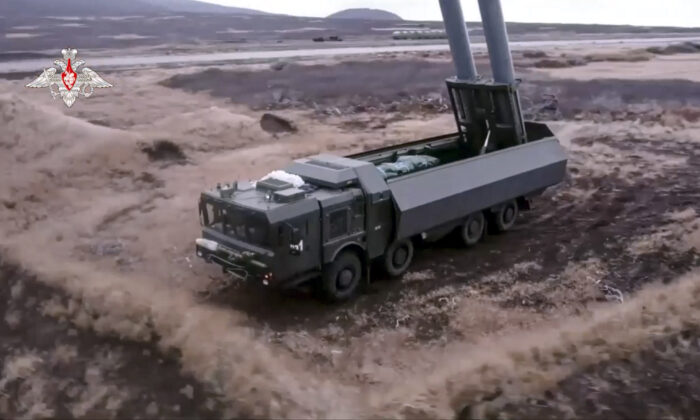 A Bastion missile launcher is positioned on the Matua Island, part of the Kurils Islands chain, in Russia, on Dec. 2, 2021. (Russian Defense Ministry Press Service via AP)
Asia & Pacific

Russia’s defense ministry said it deployed the Bastion coastal missile system, which has a range of up to 500 kilometers (270 nautical miles), to an uninhabited volcanic Matua island in the Kuril Islands, despite the islands being claimed by Japan as its “Northern Territories.”

In a statement on Dec. 2, the ministry said the crews of Bastion missile systems were deployed for the first time and entered duty on Matua, with servicemen keeping a 24-hour watch over the adjacent water area and straits.

It stated that all “equipment, personnel, and material base were delivered to the island zone by amphibious ship of the Primorsk Flotilla of the Pacific Fleet’s diverse forces.”

The ministry also posted a video showing massive missile carriers moving ashore from amphibious landing vessels and driving along the coast of the volcanic island to take firing positions as part of drills.

Kremlin spokesman Dmitry Peskov claimed that Russia owns sovereign right to deploy its military forces at any part of its territory where it deems necessary, echoing the same claim the Kremlin made in July when Tokyo issued a diplomatic protest against Russian Prime Minister Mikhail Mishustion’s visit to a disputed island chain.

Peskov said the Supreme Commander-in-Chief approved the missile deployment. However, he affirmed that Russia values its bilateral relations with Japan and that the country is committed to resolving the Kuril Islands territorial dispute with Japan.

“We maintain a political will to pursue a comprehensive dialogue with our Japanese partners in order to find ways of settlement,” Peskov told reporters on Dec. 2.

Russia has been increasing its military presence on and around the island. In 2016, it deployed the Bal and the Bastion coastal defense missile systems on two of the four southernmost Kuril Islands, followed by the deployment of top-of-the-line air defense missiles systems there and set up an airbase on the Iturup Island where fighter jets were deployed.

Japan asserts territorial rights to the four southernmost islands of the Kuril chain and calls them Northern Territories. The Soviet Union took the islands in the final days of World War II, and the dispute has kept the countries from signing a peace treaty formally ending their hostilities.

The oval-shaped, 11-kilometer-long (6.8-mile) island where the Russian missiles were deployed hosted a Japanese military base during WWII. After the Soviet takeover of the Kuril Islands, Matua was home to a Soviet military base that was closed amid funding shortages in the wake of the 1991 collapse of the Soviet Union.