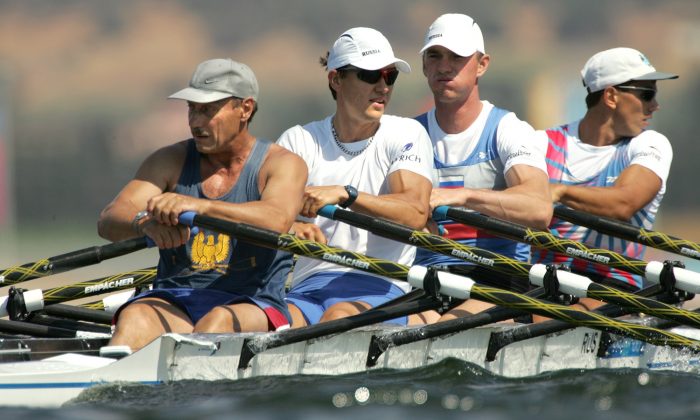 FILE- In this file photo taken on Tuesday, Aug. 17, 2004, From left: Russia's Sergei Fedorovtsev, Alexeij Svirin, Igor Kravtsov and Nikolai Spinev train for the Men's Quad Sculls event at the 2004 Olympics Games at the Schinias Rowing & Canoeing Center in Schinias near Athens, Greece. The World Rowing Federation says that trimetazidine, a banned substance, was found in a urine sample given by rower Sergei Fedorovtsev in an out-of-competition test on May 17. (AP Photo/Armando Franca, file)
News

MOSCOW—Russia’s top rowing official says a champion rower disqualified from the Olympics did not dope intentionally.

Russian Rowing Federation president Veniamin But says Fedorovtsev’s positive test “wasn’t an intentional act by him, but an accident,” in comments on Friday to Russian agency R-Sport.

He did not specify how the banned substance entered Fedorovtsev’s system.

But adds Russia sees no way to get Fedorovtsev reinstated for the Olympics, but that the three other rowers from his crew could be sent to strengthen other Russian crews for the games.

Trimetazidine was found in a urine sample given by Fedorovtsev in an out-of-competition test on May 17. He competed a week later at the final Olympic qualifying regatta in Switzerland, where Russia finished first to qualify for Rio.

As Fedorovtsev, who won a gold medal in quadruple sculls at the 2004 Athens Olympics, provided a positive doping test, the World Rowing Federation said “the results of all competitions in which the rower participated after 17 May 2016 are therefore automatically disqualified.”

New Zealand replaced Russia, after finishing third behind Russia and Canada in the qualifying event. Canada qualified by placing second, joining the top eight crews who secured their Olympic places at the 2015 world championships in France.

The New Zealand crew remained in training, and was confirmed to go to Rio by its national Olympiccommittee.

“We have appreciated the emotional ups and downs as the athletes first missed qualification only to be asked to remain in competition mode,” Simon Peterson, the CEO of Rowing New Zealand, said. “We are hugely disappointed that our athletes found themselves competing against cheats, however very pleased that today they have achieved their goal of winning a spot at the Olympic Games in Rio.”