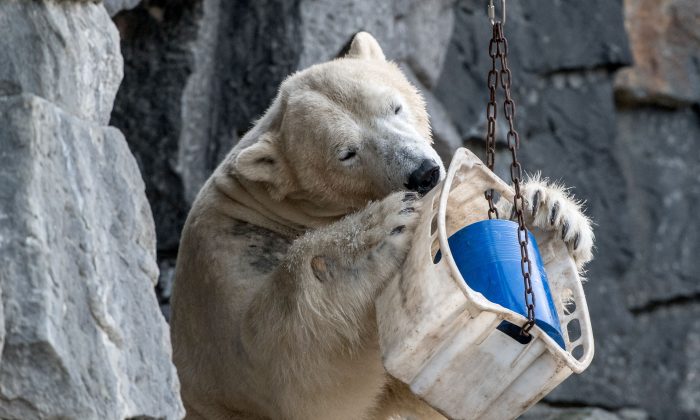 A polar bear named Wolodja playing inside his enclosure at the Tierpark zoo in Berlin, Germany, on March 4, 2018. (Paul Zinken/AFP/Getty Images)
International

A remote Arctic region of Russia has declared a state of emergency over a polar bear invasion that has left residents afraid to go outside.

The unruly bears have entered homes and public buildings in the remote Novaya Zemlya archipelago, where officials have warned of a “mass invasion.”

Around 3,000 people live on the Novaya Zemlya islands, with the BBC reporting that some residents have been attacked.

Local administration head Vigansha Musin was reported by the British news outlet as saying that the local military garrison, where air and air defense forces are based, has had over five bears come onto the base.

“I’ve been on Novaya Zemlya since 1983,” he said in an official press release cited by BBC. “There’s never been such a mass invasion of polar bears.”

The main settlement on the archipelago—Belushya Guba—has reported a total of 52 bears in its vicinity, with some displaying aggressive behavior.

People are “afraid to go outside” and “daily life is in turmoil,” said the deputy head of the local administration, Aleksandr Minayev, according to the Daily Mail.

“Parents are wary of letting children go to schools and kindergartens,” he said.

“There are cases of aggressive behavior of wild animals—attacks on people, penetration into residential and office buildings. There are constantly 6 to 10 bears inside the settlement,” he said.

The bears “literally chase people” and make their way into the entrances of apartment buildings, another official was cited by the Daily Mail as saying.

Polar bears in Russia are classed as an endangered species.

Hunting the animals is banned and Novaya Zemlya residents have been warned that if they shoot the bears, they could face prosecution.

Yet despite the creatures’ incursion, the federal environment agency has refused to issue licenses to shoot the bears.

Rather, a team of specialists has been dispatched to Novaya Zemlya to work with residents on nonlethal ways to end the infestation.

Officials were cited by the BBC as saying that the bears had lost their fear of police patrols and signals used to scare them away. They said that if the currently deployed measures are unable to drive the bears away, they may need to be culled.

Changing weather patterns and associated melting of Arctic ice have forced polar bears to spend more time on land in search of food. This sometimes puts them at odds with humans.

The BBC reported that in 2016 five Russian scientists stationed at a remote weather station on the island of Troynoy, east of Novaya Zemlya, spent several weeks under siege by polar bears.

Station head Vadim Plotnikov was cited as saying that 10 adult bears and four cubs had surrounded the station.

The scientists were unable to perform some of their duties due to the siege, Plotnikov said, and the bears had killed a dog belonging to one of the staff.

The scientists reportedly requested flares to scare off the bears.

Vassiliy Shevchenko, who works for the state monitoring network that owns the weather station, told the BBC that the requested supplies had been sent in by helicopter.

“They told us there was a female polar bear with a cub, which spent its evenings under the station’s windows,” Shevchenko said, according to the BBC. “We asked them to be extremely careful and to stay inside.”

The helicopter also airlifted in two dogs to help the scientists keep the bears at bay.