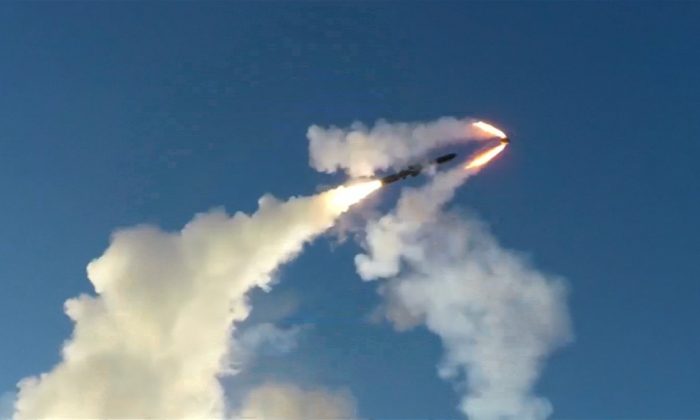 Russia said that it has tested a new anti-ballistic missile designed to protect Russia’s borders from incoming missiles.

The country’s Ministry of Defense test-launched the weapon at the Sary-Shagan missile testing site in Kazakhstan, according to the Moscow Times.

A video published by the ministry-backed Zvezda television channel on June 4 shows the system being transported, loaded, and fired into the air.

“The air and missile defense crew of the Russian Aerospace Forces has successfully conducted another test launch of a new Russian missile defense system at Sary-Shagan,” the ministry told the state-run TASS news agency.

The agency also that the missile was able to hit the intended target with precision.

Colonel Vladimir Sergienko told the outlet that “after a series of tests, the new anti-missile system” has “successfully completed its task, hitting the conventional target with a given accuracy,” according to a translation from Russian to English.

Other details, including the name of the weapon, weren’t revealed.

A new missile has been tested, Russian military says https://t.co/NHON88vej7

Last year, the country’s defense forces conducted tests at the Sary-Shagan site, with the last being announced in December 2018.

Russian state-run media reported that a nuclear-powered cruise missile has been successfully tested and will allegedly have “unlimited” range.

Officials said the Burevestnik, or “Storm Petrel,” missile has “unlimited” range and can get past known defenses, according to state-backed RT.

“A major stage of trials of the cruise missile of the Burevestnik complex, the tests of the nuclear power unit, were successfully completed at one of [the] facilities in January,” a source who works in Russia’s missile industry told state-run TASS.

Russian Defense Ministry officials have not confirmed the information provided by the source.

President Vladimir Putin previously said that Russia had developed a high-powered nuclear engine intended for cruise missiles that has an unlimited range along with the ability to penetrate missile and air defense systems.