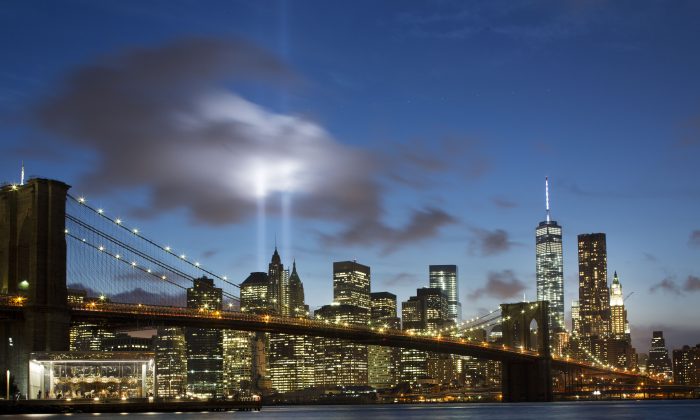 The Tribute in Light rises behind the Brooklyn Bridge at the World Trade Center complex in New York on Sept. 10, 2014. (AP Photo/Mark Lennihan)
Europe

A Russian Communist Party newspaper is claiming Russia will publish satellite photos that claim the U.S. was involved in the Sept. 11, 2001 terrorist attacks. It comes as a top Russian aide warned the U.S. to not “arm Ukraine” in the country’s fight against separatist rebels in the east.

Pravda, which was the mouthpiece of the Soviet Union before it collapsed, claims that “Putin is going to hit once, but he’s going to hit hard.” Pravda is currently owned by the Communist Party of the Russian Federation, but it was used as a propaganda tool by the Soviet Union for most of its existence and particularly under dictator Joseph Stalin. The current form of Pravda isn’t much different, which features a smorgasbord of pro-Russia and anti-America articles with inflammatory headlines like “USA creates Fourth Reich to destroy Russia,” “America’s Iron Curtain,” and it has published articles touting Russia’s nuclear arsenal.

Also, the timing of the article should be questioned, as the U.S. and Russia have been in a tense international standoff over Russian-backed militants fighting to control parts of eastern Ukraine. The Pravda article also claims a portion of the alleged satellite photos are from the website www.secretsofthefed.com.

Russian President Vladimir Putin has made comments that contrast with the recent Pravda report. In 2011, Putin said the terror attacks on Sept. 11 were not carried out by the U.S., saying the notion that American intelligence agencies orchestrated the attacks are “complete nonsense,” according to state broadcaster RT. Putin added: “To imagine that US intelligence services did it deliberately, with their own hands, is complete nonsense. Only people who do not understand the workings of security agencies can say that. It would be impossible to conceal it.”

The Pravda article adds:  “Russia is preparing the release of evidence of the involvement of the US government and intelligence services to the September 11 attacks. In the list of evidence includes satellite images. The motive was to deceive and murder its own citizens.”

The article sent a number of conspiracy theory websites into a frenzy on Tuesday.

Meanwhile, a close ally of Russian President Vladimir Putin told the European Parliament on Monday that an “all-out war” could take place if the U.S. supplies arms to the Ukraine government in Kiev, reported the BBC. Alexei Pushkov, a top Russian MP, said American weapons in Ukraine could “expand the war and turn it into a real threat to the whole European security system.”

On Monday, U.S. President Barack Obama said he condemns the continued Russian-backed aggression in Ukraine. The U.S., he said, is exploring “all options” to pressure Russia to respect Ukraine’s integrity.

“The possibility of lethal defensive weapons is one of those options being examined,” he said, according to ABC News. “I want to emphasize that a decision has not yet been made.”

“The 21st century cannot have us stand idle and simply allow the borders of Europe to be redrawn at the barrel of the gun,” Obama also said.