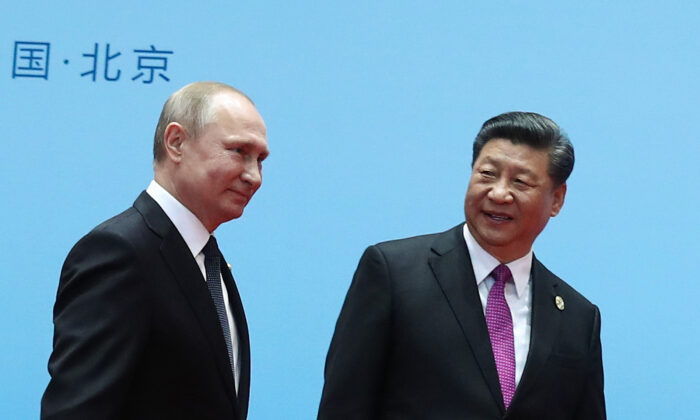 Chinese leader Xi Jinping (R) and Russian President Vladimir Putin during the welcoming ceremony on the final day of the Belt and Road Forum in Beijing on April 27, 2019. (Valery Sharifulin/Sputnik/AFP via Getty Images)
International Relations

The Russian leadership is touting its support from Beijing this week, as leaders from the two nations prepare to meet in person for the first time since February.

The Russian Parliament said that the Chinese Communist Party’s (CCP) third-in-command, Li Zhanshu, explicitly approved of the war in Ukraine and assured Russia of Chinese support for the conflict.

“China understands and supports Russia on issues that represent its vital interests, in particular on the situation in Ukraine,” Li said, according to the State Duma.

The quote was not corroborated in China’s statement of the event, which did not mention Ukraine.

CCP leader Xi Jinping is scheduled to meet face-to-face with Russia’s Vladimir Putin later this week during a regional summit in Uzbekistan.

It will also be the first time Xi has left China in more than two years.

The meeting will likely give Xi the opportunity to solidify his personal importance ahead of the 20th Party Congress in October, during which he is widely expected to cement a historic third term in office. Likewise, it will allow both leaders to demonstrate their mutual interest: opposition to the United States.

Russia’s poor military performance in Ukraine has placed China in the international spotlight, as the CCP has consistently defended Russia’s behavior and refused to acknowledge international sanctions against the Kremlin as legitimate. The Russian war effort hit a new low last week as Russian armed forces were forced to abandon the key city of Izium.

Those circumstances, and the lack of acknowledgment of Li’s comments by the CCP, raise the question of whether Moscow is attempting to use Li’s alleged words to play up ties between Russia and China ahead of the meeting.

“On the Ukrainian issue, we see how [the United States and NATO] have put Russia in an impossible situation,” Li said, according to the Duma. “And in this case, Russia made an important choice and responded firmly.”

“We fully understand the necessity of all the measures taken by Russia aimed at protecting its key interests, we are providing our assistance.”

If true, the comments would mark the first time a Chinese official publicly endorsed the “necessity” of Russia’s invasion or admitted that Beijing was “providing assistance” for Russia in Ukraine.

Beijing has firmly refused to condemn Russia’s invasion of Ukraine and has censored those who refer to the conflict as a “war.”

According to the official Xinhua News Agency, Li expressed China’s willingness to “continue to work with Russia to firmly support each other on issues concerning each other’s core interests and major concerns.”