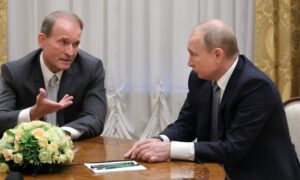 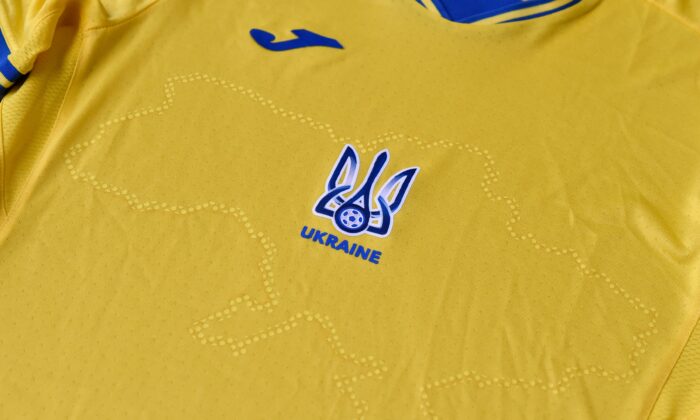 A EURO 2020 jersey of the Ukrainian national football team. The uniforms in the blue-and-yellow colors of the Ukrainian flag feature the silhouette of Ukraine that includes Russia-annexed Crimea and the separatist-controlled regions of Donetsk and Lugansk as well as the words "Glory to Ukraine! Glory to the Heroes!" on June 6, 2021. (STRINGER/AFP via Getty Images)
Soccer

MOSCOW—A tense tug-of-war between Russia and Ukraine has spread to soccer, with Russian officials and lawmakers denouncing the design of the Ukrainian national team’s shirt for this month’s European Championship.

The yellow-and-blue Ukrainian design features a map of the country including Crimea, the Black Sea peninsula that Russia annexed in 2014 following the ouster of its Moscow-friendly president.

Most of the world hasn’t acknowledged the annexation and international law still recognizes Crimea as Ukrainian territory. Russia also has cast its support behind separatists in eastern Ukraine, where seven years of fighting has killed more than 14,000.

Andrii Pavelko, the president of the Ukrainian soccer association, presented the new uniform on Facebook on Sunday, hailing it as a symbol of the “single and undivided homeland” that would inspire players to “fight for entire Ukraine.”

Pavelko is a member of the executive committee of European soccer body UEFA, which signed off on the design for the tournament.

“The shirt of the Ukrainian national team (and of all other teams) for UEFA Euro 2020 has been approved by UEFA, in accordance with the applicable equipment regulations,” the Switzerland-based organization said.

Dmitry Svishchev, a member of the Russian parliament’s lower house, denounced the Ukrainian uniform as a political gesture designed to draw sports into politics.

“It’s setting the stage for a conflict using the uniform,” he said. “Sports arenas aren’t for political declarations.”

“They can dream about what they want,” Valuev said, “but Crimea is part of the Russian Federation and it’s not up for discussion.”

Ukraine and Russia both qualified for the 24-team tournament but a UEFA rule in place since 2014 to separate the two countries’ national teams and club teams prevented them from being drawn together.

The tournament draw also prevents Ukraine and Russia from facing each other in the round of 16.

Russia will host seven Euro 2020 games in St. Petersburg. None will involve Ukraine.