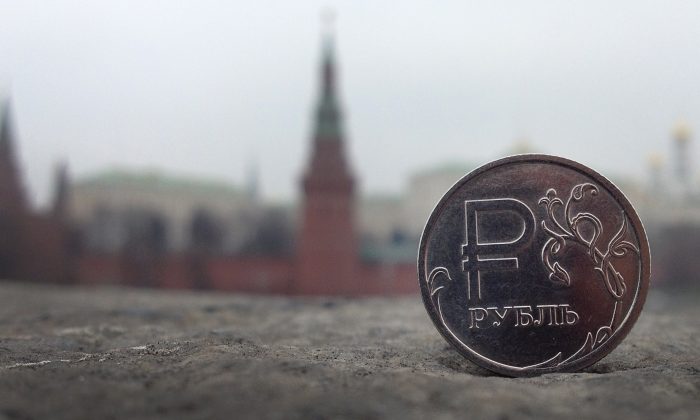 A Russian ruble coin is pictured in front of the Kremlin in in central Moscow, on Nov. 6, 2014. (Alexander Nemenov/AFP/Getty Images)
Russia-Ukraine War

The Russian economy is on the brink of a financial crisis worse than the 2009 recession, warns the International Institute of Finance (IIF) in a new report (pdf).

The bombardment of economic and financial sanctions and the recent action to ban or curtail Russian oil imports could result in an economic contraction of -15 percent for the full year, down from the previous estimate of 3 percent, the association for the global financial services industry stated.

The group forecast that other boycotts of Russian energy would threaten Moscow’s ability to import goods and services, a scenario that would exacerbate the recession. Its baseline assumes prolonged fighting without an intense escalation in the military conflict.

“We forecast -15 percent annual average growth in 2022, twice as bad as the 2009 recession, with risks tilted to the downside. High energy prices are a mitigating factor currently, boosting the current account surplus and thus hard currency inflows,” the IIF wrote.

For the rest of the emerging markets and broader global economy, the organization does not anticipate a contagion event, considering the small size of the economy.

“Instead, we think Eastern and Western Europe will be hit via their export exposure to Russia, something markets are only just beginning to price,” the IIF stated. “This trade channel leaves the United States and Latin America largely unaffected and is moderate for much of Asia including China.”

IIF researchers are not the only ones to prognosticate an economic collapse in Russia.

In a recent note to clients, JPMorgan Chase analysts forecast a “collapse” that would be similar to the severe downturn that occurred in the fallout of Russia’s default that triggered a severe debt crisis in 1998.

From sanctions on the central bank to Moscow being removed from the SWIFT international messaging system, the bank predicts a gross domestic product crash of around 11 percent.

“Russia’s export earnings will be disrupted, and capital outflows will likely be immediate despite its large current-account surplus. Imports and GDP will collapse,” JPMorgan economists averred.

The ruble has lost 57 percent of its value against the U.S. dollar this year, trading at less than a penny.

Meanwhile, the Kremlin is finding it harder to tap into its $630 billion war chest, which includes more than $130 billion in gold reserves. Russia has had trouble searching for buyers, while many assets have been frozen. With many bonds coming due for foreign bondholders over the next couple of months, Russian officials warned that payment is contingent on unfreezing assets.

Analysts at Goldman Sachs also lowered their forecast for Russian GDP in 2022 from 2 percent growth to a 7 percent contraction.

Despite being the world’s largest oil and gas exporter, Russian exports have tumbled since the beginning of its invasion of Ukraine. Should these sanctions persist and expand, seaborne crude could lead to a decline of about three million barrels per day, strategists at Goldman Sachs Research say.

Russia is looking to rely on China as a critical trade partner. Last month, Moscow inked a lucrative 30-year agreement with Beijing that includes an additional 10 billion cubic meters of gas per year. However, the planned pipeline to transport supply could take up to three years to complete.

As a result, Russia will still need to depend on sales to Europe to finance the Ukraine invasion and support the domestic economy.

Whether this will have an impact on the broader energy market depends on China purchasing significantly more Russian oil or rerouting planned imports to other destinations.

Other experts note that it can be tough to make accurate predictions about Russia’s economy since the events of the war could drastically change at any moment.

During a recent Washington Post Live event, Treasury Secretary Janet Yellen revealed that more sanctions to penalize Russia for its “atrocities” in Ukraine are being considered.

The former head of the Federal Reserve stopped short of what these additional sanctions could entail.

“The Russian economy will be devastated as a consequence of what we’ve already done, but we continue to consider further steps we can take,” she said.

“We have isolated Russia financially. The ruble has been in a free fall,” Yellen added. “The Russian stock market is closed. Russia has been effectively shut out of the international financial system.”

Despite inflation-adjusted wages falling and the consumer price index trending at a 40-year high, Yellen believes that “Americans have been doing pretty well.”