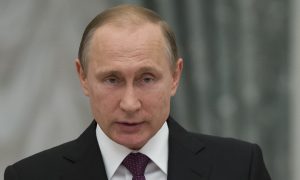 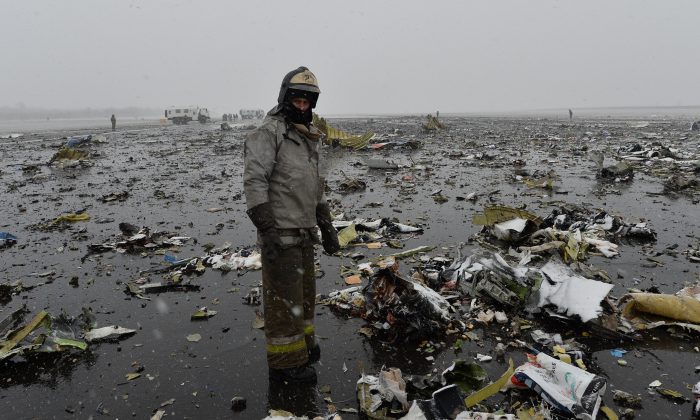 A Russian Emergency Ministry employee stands next the wreckage of a crashed plane at the Rostov-on-Don airport, about 600 miles south of Moscow, Russia, on March 19, 2016. (AP Photo)
Europe

ROSTOV-ON-DON, Russia—Aviation experts on Sunday began examining the black boxes from the FlyDubai flight that crashed amid high winds at an airport in southern Russia but said the cockpit voice and data recorders were badly damaged.

FlyDubai’s Boeing 737-800 from Dubai nosedived and exploded in a giant fireball before dawn Saturday after trying to land for a second time in strong winds in the Russian city of Rostov-on-Don. FlyDubai confirmed all 62 people on the plane were killed. Most of the passengers were Russian.

Several planes had trouble landing at the airport at the time of the crash.

Sergei Zaiko, deputy chairman of the Inter-State Aviation Committee, told Russia’s Channel One that experts on Sunday were looking at the data recorders, which were delivered to Moscow earlier in the day. But the committee that investigates plane crashes in much of the former Soviet Union said in a statement they had been badly damaged and it was not immediately clear what, if any, data could be retrieved.

The black boxes were being viewed by experts from Russia, the United Arab Emirates, France and the U.S., since the American-made Boeing plane had French-made engines.

At Rostov-on-Don, hundreds of people flocked Sunday to the airport, the region’s largest, to lay flowers and leave candles and toys in memory of the dead. The city is 950 kilometers (600 miles) south of Moscow near the Ukrainian border.

The plane had enough fuel to maintain its holding pattern, which reportedly went on for two hours.

Closed-circuit TV footage showed the plane going down at a steep angle and exploding. The powerful explosion left a big crater in the runway and pulverized the plane and passengers’ remains.

The airport remained closed Sunday. Transport Minister Maxim Sokolov told reporters that emergency teams had finished combing the area and authorities were waiting for investigators to let repair teams onto runway. He expects the airport to open early Monday.

FlyDubai’s chief executive Ghaith al-Ghaith said on Sunday the plane had enough fuel to maintain its holding pattern, which reportedly went on for two hours. He expressed confidence in Russian authorities and said the carrier intends to resume flights to the airport once it reopens.

He reiterated that the Rostov-on-Don airport was open Saturday despite the high winds and was “good enough to operate” at the time of the accident, and that it was up to Russian authorities to make that determination.

Some of the crash victims were from rebel-held areas in eastern Ukraine where fighting between Russian-backed separatists and Ukrainian government troops has killed more than 9,100 people in nearly two years. The war has turned the region’s main airport of Donetsk into a wasteland, and many locals have been using the airport in Rostov-on-Don, across the border.

Self-proclaimed rebel authorities in Donetsk said Sunday that two residents had been killed in the crash, while the Komsomolskaya Pravda daily reported that a family of three from the rebel-controlled town of Sverdlovsk in Ukraine was among the victims.