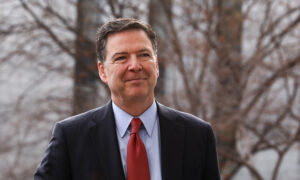 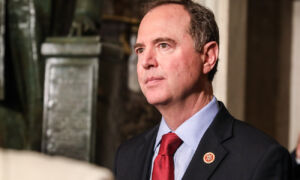 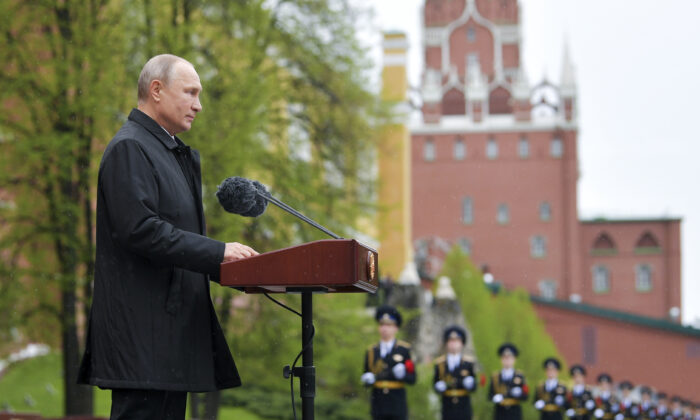 Russian President Vladimir Putin addresses the nation from the Tomb of the Unknown Soldier at the Kremlin wall marking the 75th anniversary of the Nazi defeat in World War II in Moscow, Russia on May 9, 2020. (Alexei Druzhinin, Sputnik, Kremlin Pool Photo via AP)
Europe

MOSCOW—Russian President Vladimir Putin marked Victory Day, the anniversary of the defeat of Nazi Germany in World War II, in a ceremony shorn of its usual military parade and pomp by the CCP virus pandemic.

In neighboring Belarus, however, the ceremonies went ahead in full, with tens of thousands of people in the sort of proximity that has been almost unseen in the world for months.

Putin on May 9 laid flowers at the Tomb of the Unknown Soldier just outside the Kremlin walls and gave a short address honoring the valor and suffering of the Soviet army during the war.

Victory Day is Russia’s most important secular holiday and this year’s observance had been expected to be especially large because it is the 75th anniversary, although the Red Square military parade and a mass procession called The Immortal Regiment were postponed as part of measures to stifle the spread of the CCP (Chinese Communist Party) virus, commonly known as the novel coronavirus.

The only vestige of the conventional show of military might was a flyover of central Moscow by 75 warplanes and helicopters.

The ceremony was the first public appearance in about a month for Putin, who has worked remotely as the virus took hold.

In his speech, he didn’t mention the virus—Russia has nearly 200,000 confirmed cases—or how its spread had blocked the observances that were to be a prestige project for him.

But he promised that full commemorations would take place.

“We will, as usual, widely and solemnly mark the anniversary date, do it with dignity, as our duty to those who have suffered, achieved and accomplished the victory tells us,” he said. “There will be our main parade on Red Square, and the national march of the Immortal Regiment—the march of our grateful memory and inextricable, vital, living communication between generations.”

The sharply reduced observances this year left a hole in Russia’s civic and emotional calendar. The war, in which the Soviet Union lost an estimated 26 million people including 8.5 million soldiers, has become a fundamental piece of Russian national identity.

Beyond the stern formalities of the Red Square military parade and smaller parades in other cities, Russians in recent years have turned out in huge numbers for the Immortal Regiment processions, when civilians crowd the streets displaying photographs of relatives who died in the war or endured it. Russian officials routinely bristle at criticism of the Red Army’s actions in the war, denouncing the comments as attempts to “rewrite history.”

An online substitute for the processions took place on May 9, showing streams of photos of veterans submitted by relatives.

A full military parade of some 3,000 soldiers was held May 9 in Minsk, the capital of Belarus, which hasn’t imposed restrictions to block the virus’s spread, despite sharply rising infection figures. Tens of thousands of spectators, few of them wearing masks, watched the event.

President Alexander Lukashenko, who has dismissed concerns about the virus as a “psychosis,” said at the parade that Belarus’s ordeal in the war “is incomparable with any difficulties of the present day.”

Belarus’s more than 21,000 recorded infections is higher than in neighboring Ukraine and Poland, both with populations about four times the size.

The former Soviet republic of Turkmenistan, which hasn’t reported any CCP virus infections, held a large parade and procession late on May 9 in the capital Ashgabat—the first time the country has marked Victory Day with a large public display.

Among the guests was Deputy Russian Defense Minister Alexander Fomin, whose speech at the ceremony underlined Russia’s sensitivity about interpretations of World War II.

“Now, unfortunately, in a number of countries, we see attempts to revive Nazi ideology, falsify the common history, exalt traitors and revise the role of the Soviet people in the victory over fascism,” he said.

None of those at the parade wore masks or observed social distancing.

In the capitals of Latvia and Estonia, both former Soviet republics with large ethnic Russian populations, small groups were seen arriving throughout the day to lay flowers on Soviet war memorials.

By Jim Heintz. The Epoch Times contributed to this report