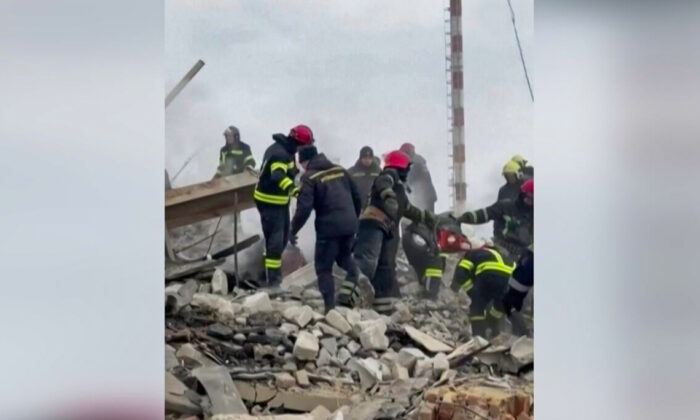 Emergency services personnel work following a missile strike on the Vinnytsia International Airport building in Vinnytsia, Ukraine, on March 6, 2022, in a still from a video. (Courtesy of Serhiy Borzov via Reuters/Screenshot via The Epoch Times)
Russia-Ukraine War

“Against our city, against our peaceful Vinnytsia which never posed a threat to Russia in any way,” Zelensky said in a video on Twitter. “A brutal, cynical missile strike has completely destroyed the airport.”

The airport was destroyed in the attack, Zelensky said, according to a translation.

Unconfirmed video footage uploaded online by Ukraine’s Parliament and other accounts appeared to show black smoke rising in the vicinity of the airport. Kuleba posted a clip that appeared to show the cruise missiles heading in the direction of the airport. The Epoch Times could not verify the authenticity of the footage or the veracity of Zelensky’s or Kuleba’s claims.

‼️ Urgent appeal by President @ZelenskyyUa: a missile strike on #Vinnytsia consisted of eight missiles; the airport is completely destroyed.
The President called on the world to close the skies over #Ukraine and provide Ukraine with aircraft. pic.twitter.com/0s8nUneRZP

The Russian embassy in Israel disputed the reports that the Vinnytsia airport was only used for civilian purposes. The airport, it said, is “dual-purpose” and serves as a base of operations for the Ukrainian armed forces.

❌ Vinnytsia Airport is not civilian, it is a dual-purpose object, where the 456th separate mixed aviation brigade of the Ukrainian Armed Forces is based. The satellite map shows An-26 aircrafts, including those in camouflage and a Mi-8 helicopter.
🔗 https://t.co/pS4auCc2Ez https://t.co/Ldcp2uJP2W pic.twitter.com/DxQxd9XGNe

The airport also is “where the 456th separate mixed aviation brigade of the Ukrainian Armed Forces is based,” according to a Twitter post from the Russian embassy. It posted a satellite map that allegedly showed An-26 aircraft, “including those in camouflage and a Mi-8 helicopter.”

With the latest incident, Zelensky and the Ukrainian Parliament again called for NATO and the United States to enforce a no-fly zone over Ukraine.

Last week, the head of NATO and top White House officials repeatedly insisted that there would not be a no-fly zone, saying that such a move would most likely escalate the conflict and lead to a wider European war, or even a third world war.

On Sunday, Putin told Turkish President Recep Tayyip Erdogan that Russia’s invasion of Ukraine could be halted “only if Kyiv ceases hostilities and fulfills the well-known demands of Russia,” according to state-run media.

“Hope was expressed that during the planned next round of negotiations, the representatives of Ukraine would show a more constructive approach, fully taking into account the emerging realities,” said his statement.