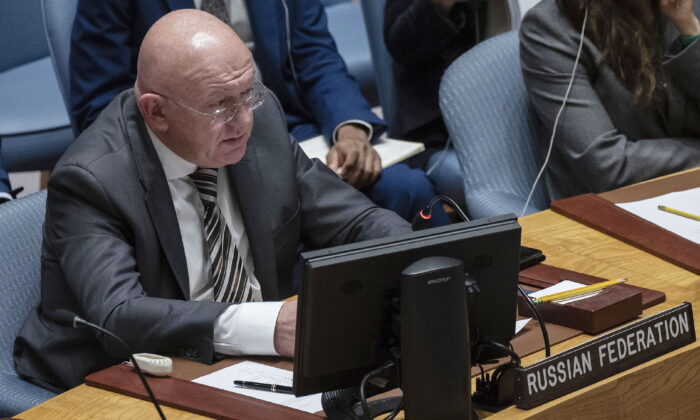 Russia and US Clash Over Western Weapons for Ukraine

UNITED NATIONS—Russia dismissed claims that modern Western weapons supplied to Ukraine can lead it to victory as “empty fantasies,” insisting Thursday that the Russian army is destroying Ukraine’s old and new weapons and will “finish” the war as President Vladimir Putin vowed.

The United States accused Russia of having “the gall to blame other countries for refusing to step aside as it seeks to destroy another U.N. member state.” The Biden administration said it is committed to supporting the Ukrainian people “as they defend their lives, their liberty, and their democracy.”

The clash came at the U.N. Security Council’s third consecutive meeting on Ukraine.

On Tuesday, the council held a meeting at Russia’s request to hear about the situation at the Zaporizhzhia nuclear plant in southeastern Ukraine where Ukraine and Russia have accused each other of shelling the facility and threatening a possible nuclear catastrophe.

On Wednesday, at the request of the U.S. and Albania, the council discussed what the U.S. said is the forcible deportation of hundreds of thousands of Ukrainians to Russia.

He told the council that the consequences of Ukrainian President Volodymyr Zelenskyy and his “entourage” saying that Western weapons and “so-called wonder warfare” will change the course of the six-month conflict and bring Ukraine victory is “very lamentable for Ukraine.”

“We are very far still from the end of this destructive process,” Nebenzia said. “Let me say immediately, however, that Western weaponry is not playing a decisive role on the battlefield regardless of what the Ukrainians and their vassals are saying.”

“The Russian army consistently, with minimal risk for its soldiers and civilians, is destroying not only the old weaponry of Soviet models, which the Eastern European countries are discharging, but also the modern NATO weapons,” he said.

Nebenzia conceded that “several minor villages were taken” recently, leading to Western media claims of a Ukrainian counteroffensive, but he said most military experts agree that new weapons will not change the balance of forces “and will only extend the agony of the Zelenskyy regime.”

U.N. disarmament chief Izumi Nakamitsu, who briefed the council, said there have been “widespread and independently verified reports of the transfer of major conventional weapon systems to local armed groups in Ukraine, including artillery rocket systems.” She did not say where they came from, only raising general concerns about diversion.

Nebenzia claimed “a significant proportion” of Western weapons find their way into the hands of smugglers, and could end up in the hands of terrorists in Europe, Asia, the Middle East, and Africa.

U.S. deputy ambassador Richard Mills called Thursday’s meeting “a transparent attempt” by Russia to distract from Wednesday’s meeting on the forced displacement of Ukrainians. He noted the U.N. assistant secretary-general for human rights said her office had reports of torture “in conjunction with Russia’s abhorrent use of `filtration camps.’”