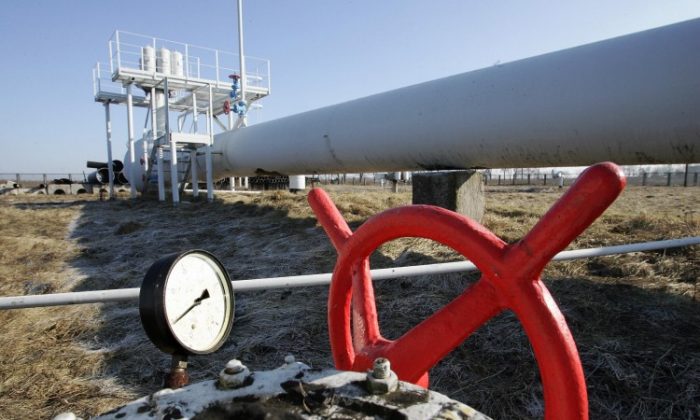 A gas pipeline is seen near Ukraine's capital Kyiv on Feb. 12, 2008. According to experts, a ban on Ukrainian cheese by Russia has political aims, including solidifying Russia's negotiation position on gas prices. (Sergei Supinsky/AFP/Getty Images)
Europe

Russia and Ukraine Tense Over Cheese

KYIV, Ukraine—A major trade dispute over cheese is fermenting between Russia and Ukraine with Moscow banning Ukrainian cheese imports citing quality issues. Kyiv insists that the ban has nothing to do with substandard cheese, and everything to do with the politics of trying to pressure Ukraine on various trade issues.

During the kerfuffle earlier this week, Russia banned imports from three major Ukrainian cheese manufacturers saying the cheese contained too high a percentage of palm oil, which can be used as a cheap substitute for milk fat.

A plan to solve the dispute by conducing joint laboratory tests was at first agreed to then rejected on the Russian side.

The three currently banned cheesemakers export about 30 percent of their product to Russia, or almost 72,000 tons per year. Russia is now threatening to increase the list of banned cheeses if more quality discrepancies are found.

Kyiv says the current ban will not seriously hurt its cheese industry, but industry experts say it could cost as much as $300 million per year—possibly leading to bankruptcies and mass layoffs—if the issue goes unresolved.

Political Background
Many Ukrainian experts believe that Russia is using trade to strengthen its negotiating stance and to urge Kyiv to join the Customs Union it has established together with ex-Soviet states Belarus and Kazakhstan.

This is certainly not the first trade conflict. Moscow has banned or imposed import quotas on other Ukrainian goods including iron and steel. A Russian railway company halted the use of about 80,000 Ukrainian freight cars citing poor quality, a Ukraine agency reported.

“The main goal for Russia is to strengthen its negotiation stance on gas issues and everything related to Ukraine’s geopolitical choice,” says Vladimir Zastava, an expert with the Kyiv-based think tank, Gorshenin Institute.

The cheese conflict first erupted in mid-January just after Kyiv stated that it would reduce its gas consumption because it can’t afford the high price it pays to Russian for natural gas—over $400 per 1,000 cubic meters (35,315 cubic feet). The price was negotiated in 2009 by former Premier Yulia Tymoshenko, who is serving a seven-year jail term for abuse of authority over the deal.

However, Russian diplomats are asking Kyiv officials not dramatize the cheese conflict and not to accuse the Kremlin of any political motives. “For sure, the issue is technical and it will be resolved according to intergovernmental standards,” said Aleksey Urin, the head of the economic policy group of the Russian Embassy in Ukraine.

Experts and politicians doubt that the gas issue will be resolved anytime soon, as Russian leaders are preparing for presidential elections in early March.

In early February, Stanislav Govorukhin, Putin’s supporter and filmmaker, made public his view that Ukrainian President Victor Yanukovych should strongly consider a future in the Russian-led Eurasian Union since the European Union does not want to admit Ukraine.

“I have no final answer as to what Yanukovych will choose, but I know for certain that despite all illusions, Kyiv’s rejection of Russia’s proposal will be for Yanukovych and his party the beginning of the end,” Govorukhin was reported as saying by the Moscow-based Kommersant newspaper.