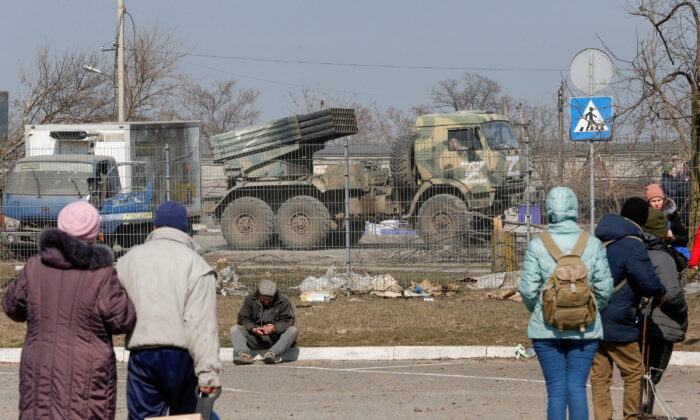 Service members of pro-Russian troops drive a multiple rocket launcher with the symbols "Z" painted on its sides in the course of Ukraine-Russia conflict in the besieged southern port city of Mariupol, Ukraine, March 24, 2022. (Alexander Ermochenko/File Photo/Reuters)
Russia-Ukraine War

Moscow is attempting to divide Ukraine through war efforts in the country, Kyiv’s military intelligence chief Kyrylo Budanov said while adding that his nation’s army will proceed to engage in guerilla warfare to avoid such a situation.

“After the failures near Kyiv and the impossibility of overthrowing the central government of Ukraine, Putin is already changing the main operational directions—the south and the east. There is reason to believe that he is considering a ‘Korean’ scenario for Ukraine,” Budanov said of the Russian president in a statement.

“That is, he will try to impose a dividing line between the unoccupied and occupied regions of our country. In fact, it is an attempt to create North and South Korea in Ukraine. After all, he is definitely not able to swallow the whole state.”

Russia will try to unify the occupied territories into a “single quasi-state entity.” However, the counteroffensive by Ukraine complicates such plans, Budanov said.

Prior to invading Ukraine, Russian President Vladimir Putin said on Feb. 21 that Moscow will recognize the independence of Donetsk and Luhansk, regions located in the Donbass area of south-eastern Ukraine. The leaders of these two regions had asked Putin to recognize their independent status.

With Russia unable to overcome Ukrainian forces after more than a month of war, the Kremlin has indicated that it is scaling back ambitions to focus on securing the Donbass region. A leader from Lunhask said on Sunday that the region might soon hold a referendum about joining with Russia. However, the Ukrainian government hit back at these suggestions.

All such “fake referendums” in the “temporarily occupied territories” will have no legal validity and are “null and void,” Ukraine’s foreign ministry spokesperson Oleg Nikolenko said to Reuters. “Instead, Russia will face an even stronger response from the international community, further deepening its global isolation.”

Ukrainian ambassador to the United States Oksana Markarova rejected the possibility of Ukraine surrendering to Russia during an NBC program, while also stating that recognizing the eastern Ukrainian region of Donbass as an independent state was out of the question.

“I think we shouldn’t ask Ukraine what we are ready to give up in order for Russia to stop this aggression. All of us should be asking each what are we prepared to do to stop it,” she added. “Because if we lose this, it’s very important—If Ukraine loses it, it’s not only your friends lost, it means that brutality, oligarchy, and war criminals prevail on our planet.”

Kyiv and Moscow will be holding face-to-face talks in Turkey on Monday. Earlier talks between the two sides had concluded without any positive outcome.

Ukrainian President Volodymyr Zelensky has softened his stance on a compromise, saying in an interview with Russian outlet Meduza that Kyiv could guarantee neutrality and a non-nuclear status as part of a potential peace deal with Moscow, if supported by a vote from the Ukrainian people.

Declaring neutrality would effectively end the possibility of Ukraine becoming a member of NATO. The Kremlin has banned the interview in Russia.