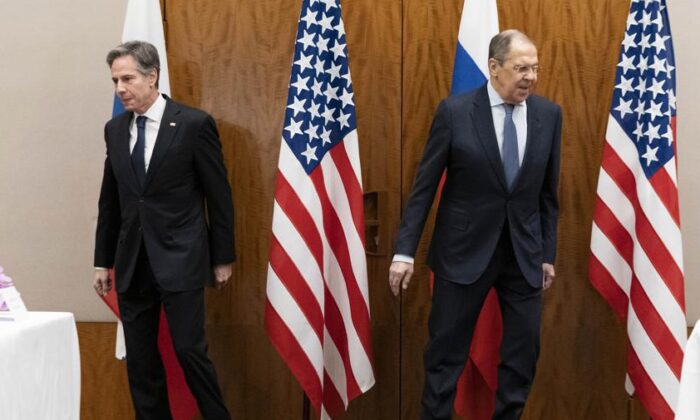 Russian foreign minister Sergei Lavrov has accused the United States of trying to shatter the existing world order via the manipulation of international bodies and alliances.

Speaking on Russian state television’s Channel 1, Lavrov on April 26 accused the Biden administration and the West of no longer recognizing international law or the key provision of the sovereign equality of all states, despite Russia’s recent invasion of Ukraine’s sovereign territory.

“They are trying to split the entire architecture that has been taking shape for many decades and based on consensus, the participation of all the main, major players, including the United States, Russia, India, Japan, China, Australia,” he said.

“They openly declare that they will be in charge, that NATO has every right to do what it wants,” the Russian foreign minister said. “Secretary-General Jens Stoltenberg can declare that NATO bears a global responsibility for security throughout the world, including in the Indo-Pacific region.”

The remarks from Lavrov come after North Atlantic Treaty Organisation (NATO) announced in early April that it would begin engaging in the Indo-Pacific region both practically and politically in light of Beijing’s growing influence and coercion, and its unwillingness to condemn Russia’s invasion of Ukraine.

Speaking following the meetings of NATO Ministers of Foreign Affairs on April 7, NATO Secretary-General Jens Stoltenberg said the global implications of the Ukrainian conflict had propelled the organization to step up its engagement with Indo-Pacific partners for the first time.

NATO’s Asia-Pacific partners include Australia, Japan, New Zealand, and the Republic of Korea.

Which Ideas Will Rule the World?

The change in NATO’s stance toward the Pacific comes amidst a background of China’s ruling Chinese Communist Party (CCP) pushing its 100-year ambition of ruling a global hegemony with its socialist system that it inherited from the former Soviet Union, and which has since been in competition with the U.S.-modelled democratic world order.

Read More
‘Clash Between a Brutal Dictatorship and a Free Government’: Bradley Thayer on Taiwan’s Importance

China’s ambitions are also the reason why middle powers like Australia and Japan are becoming regional powerhouses in the Asia-Pacific, argues international security expert Prof. John Blaxland, who is a professor of International Security and Intelligence Studies and former Head of the Strategic and Defence Studies Centre at the Australian National University.

Blaxland told The Epoch Times that as the world has shifted to a more multipower structure, the United States in the past few years has been shying away from leading in the international forums, which he argues has led other powers to attempt to fill the void.

This pullback, he believes, has led to the United States conceding ground in regions like the Indo-Pacific to belligerent countries like China. “[And] it’s very unnerving for countries like Korea, Japan, Australia, Philippines and others, including Thailand.”

But on the other hand, Blaxland said, the U.S. withdrawal from ideational leadership has seen other countries step forward to lead their regions in the face of rising threats from nations like China.

Likewise, he notes, Australia has become incredibly crucial to the U.S. military and political response to China in the Pacific.

“Geostrategically, and as a backup to the United States, Australia’s become more significant than ever for America’s plans and contingencies,” Blaxland said.

An Alliance of Convenience

Demonstrating the strengthening alliance between the Russian government and the Chinese communist regime, Lavrov also accused the United States and its democratic allies of trying to undermine Beijing and disrespecting the sovereignty and rights of China and Russia.

“They demand from the whole world blindly, step by step, to follow them and the already ‘built’ allies. They do not fulfill the obligation to respect the sovereign equality of states. In fact, this equality is blatantly violated, forcing everyone to follow their own ‘rules,’” he said.

The comments from Lavrov echo sentiments of the Chinese Communist Party (CCP), which on April 28 and 29 accused NATO of being an organization that constantly creates confrontation and is seeking to “mess up” the Asia-Pacific region, according to the CCP’s view of what the region should look like.

“The impact of NATO’s eastward expansion on the long-term peace and stability of Europe is worth reflecting upon. NATO has messed up Europe. Is it now trying to mess up the Asia-Pacific and even the world?” China’s foreign ministry spokesperson Wang Wenbin said.

Meanwhile, another foreign ministry spokesperson for China Zhao Lijian on April 29 announced that China and Russia would continue to collaborate on global affairs and had committed themselves to create “a new model of international relations” that will be formulated around the ideas of “non-alliance, non-confrontation, and non-targeting of third countries.”

Blaxland, though, believes Russia and China’s alliance will not last.

“It’s an alliance of convenience,” he said. “It’s not one of the trust.”

Comparing that alliance to the Five Eyes alliance between the United States, Canada, Australia, the United Kingdom, and New Zealand, he said that the CCP and Russia cannot replicate such alliances.

“We’re part of a trusted network that goes back generations and it’s not to be taken lightly. It is a very serious, profound relationship between five countries that have a degree of commonality in their values and an overlap in their interests,” Blaxland said.