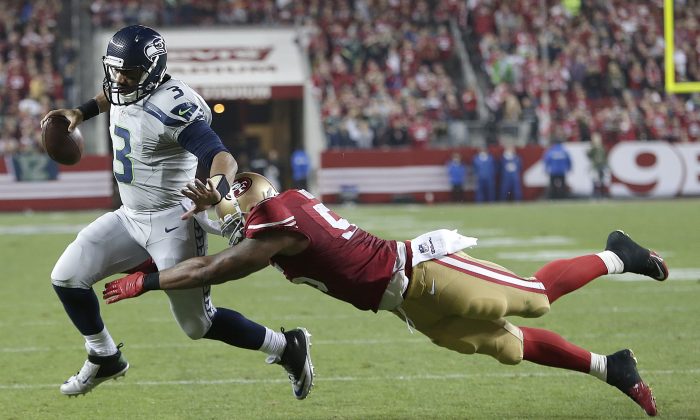 Russell Wilson Could Have Trouble Against Eagles Defense This Sunday

Russell Wilson and the Seattle Seahawks’ zone-read offense might have some trouble against the Philadelphia Eagles’ defense on Sunday.

With that in mind, defensive coordinator Bill Davis Jr. said that will give his team an advantage against Seattle’s run-heavy offense.

“It’s the biggest difference,” Davis told NJ Advance Media. “Our guys have spent a career defending this. It’s old hat to them. They have answers right away.

“From the aspect of them knowing the answers right away they’ve defended it so much, as an NFL lifer, I haven’t head to have those kind of [zone read] discussions very much in my career.”

“One of the benefits we have here is there’s no new [zone read] conversation for us,” Davis elaborated. “Like there are for teams who don’t have a whole off-season of defending it. We see it every single day of the off-season. We see it every single day during training camp. Sometimes we even see it during the course of the week when we do some good on good week, we defend the read option.”

It’s also worth noting that the Eagles have only allowed two 100-yard rushers in the two years under Davis: Rashad Jennings with the Oakland Raiders last year and Frank Gore with the San Francisco 49ers in September.

Wilson probably won’t be deterred by that, however.

“You always have to have plan A and plan B,” Wilson told the Seattle Times a few days ago. “And the plan B is the escape plan and what you’re going to do if they present this problem so you just have an idea. That way you’re prepared for any situation.”

He’s currently on pace for as many rushing yards in 2014 than he had in his first two seasons in the NFL.