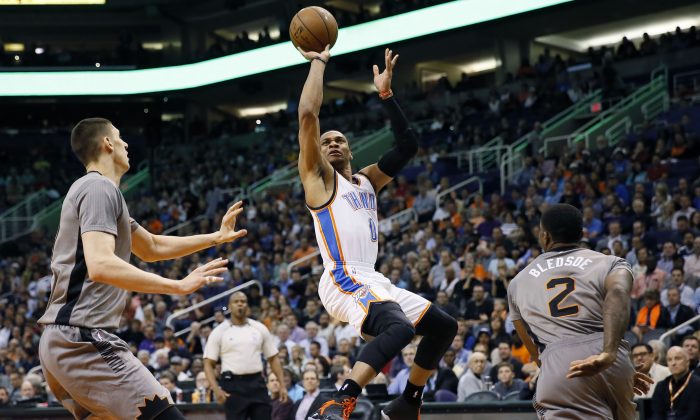 Russell Westbrook admitted that he shot too many times in Oklahoma City’s loss to Phoenix on Thursday night, and that he has to do a better job of getting his teammates involved.

Those 38 shots represented 37.6 percent of the team’s shots, while the 12 makes were about 33 percent of the Thunder’s 39 made shots. Oklahoma City was playing without Kevin Durant and Steven Adams.

“Honestly, tonight, I thought I shot too much. I have to do a better job of trusting my teammates,” Westbrook said after the game, reported the Arizona Republic.

Westbrook got off to a rough 0-8 start, while the Thunder fell behind 25-15 by the end of the first quarter.

“I have to do a better job of leading,” Westbrook said. “We started the game off too slow as a team. It was very unfortunate for us. They made some shots. We got lazy defensively but we kept fighting all game and gave ourselves a chance to win at the end of the game. “

The Thunder kept cutting into the lead, and the last stretch of the fourth quarter turned into a one-on-one showcase of Westbrook against Eric Bledsoe. Westbrook shot on nearly every possession in the last five minutes, while Bledsoe also either shot or facilitated on most of the late possessions.

Along with 39 points, Westbrook grabbed 14 rebounds, dished out 1 assists, and swiped 3 steals. He did have 4 turnovers, too.

The Suns had a 102-95 lead with about five minutes left, when Westbrook drew a foul and made two free throws. After several missed shots by both teams, Serge Ibaka drained two free throws to cut the lead to three. Westbrook missed two jumpers, but D.J. Augustin made a three-pointer to tie the game. Brandon Knight answered with a jumper and P.J. Tucker added a layup to extend the lead to four with 1:25 remaining.

Westbrook made a layup seconds later, then assisted Ibaka on a layup with 33 seconds left. After Markieff Morris made a jumper and a free throw, Westbrook answered with a layup and a free throw to send the game to overtime.

Oklahoma City broke down in overtime, though, with Westbrook, Enes Kanter, and Dion Waiters missing shots and Waiters and Augustin getting blocked. Westbrook scored four points in the extra period, but it wasn’t enough to answer the Suns, who got four points each from Bledsoe and P.J. Tucker.

“It was big for our team,” Tucker said. “All we’ve been through, fighting all year, the little skid we just went through. We’ve had so many of these games we’ve lost, overtime, last-second shots. We stuck together, even when they made their runs.”