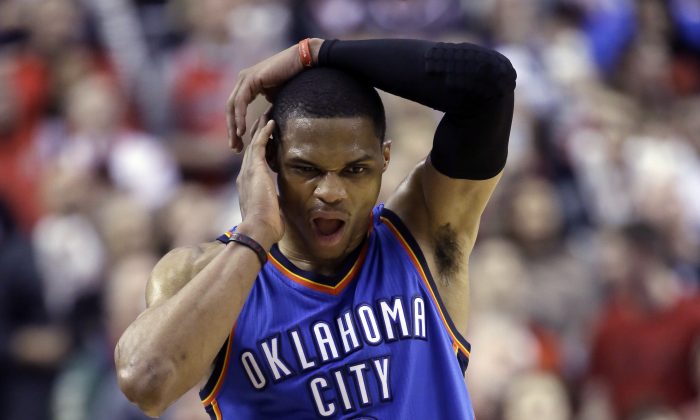 Oklahoma City Thunder guard Russell Westbrook walks down court with only seconds to go during the second half of an NBA basketball game against the Portland Trail Blazers in Portland, Ore., Friday, Feb. 27, 2015. Westbrook scored 40 points but missed an opportunity to tie the game, making only two of three free throws with just seconds left. Portland won 115-112. (AP Photo/Don Ryan)
NBA

Russell Westbrook Expected to Return From Injury on Wednesday Night

Oklahoma City Thunder guard Russell Westbrook had to get facial surgery due to an injury suffered on Friday night, but hopes to return after missing only one game.

Westbrook will likely return on Wednesday against the Philadelphia 76ers, sources told Yahoo on Tuesday.

There’s still a possibility that the star guard does not play in the game, but he will likely see at least some action against one of the worst teams in the league.

Oklahoma City can take no chances with the New Orleans Pelicans challenging for the eighth spot in the Western Conference.

Westbrook suffered a fractured cheekbone on Friday night and underwent surgery the next day.

Westbrook has been carrying the Thunder without fellow star Kevin Durant, who has missed a number of games this season including six straight games with a foot injury.

Durant’s timetable for return is unclear.