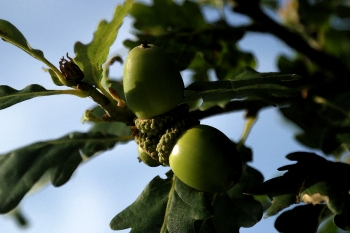 A mighty oak tree grows from a tiny acorn. Is the secret of this phenomenon to be found in DNA, or is another explanation possible? (Photos.com)
Beyond Science

The World of Rupert Sheldrake, Part I

While an army of scientists and geneticists light the path for resolving the ultimate mysteries of DNA, a controversial British biologist explains how our anatomy and thoughts are related to the universe through mystical and imperceptible forces.

Contrary to the mechanistic understanding of biological processes, biologist and author Rupert Sheldrake believes that genes do not in fact represent the factor which determines the form of living beings. In the same way that a seed does not contain microscopic trees in its interior, the author of “A New Science of Life” maintains that genes are not capable of containing the information necessary for creating vegetable, animal, or human anatomy.

But in order to comprehend Sheldrake’s unconventional ideas, it may be necessary to rethink the origin of our universe: the Big Bang.

According to Sheldrake, from its inception to today, the universe acquired some habits while losing others. Over time, such habits developed like a wealth of incorporated memory or, as some might say, like “laws of nature.”

But this idea is not vanguard, nor does it belong exclusively to holistic biology; it’s been around long before Sheldrake.

In “Life and Habit,” Samuel Butler proposed that animal instincts, embryo formation, and even atoms, molecules, and crystals, should come from a form of inherent memory. For example, the movement of an atom is independent of any human intention. When protons, neutrons, and electrons are spinning around, instantaneously the inherent memory of the universe will do what it has known for millennia: assemble these components into an atom. Allegedly, laws of nature such as strong nuclear attraction, electromagnetism, and so on, inevitably collude to unite this atom.

Continuing with this line of reasoning, Sheldrake transferred the same example to one of the greatest enigmas of contemporary biology, an enigma for which many scientists do not show much interest: How did organisms grow and develop through the primordial state? How do plants grow from seeds? How do embryos develop from fertilized cells?

In the 17th century, the mechanistic theory supposed that a valid mechanism of succession was one in which a tiny oak tree could be contained in its seed (the acorn).

In this way, the only thing the oak needed to do was receive water, sun, and other resources to develop as such. But this idea brought about another dilemma: If a small oak was contained in the acorn, this would mean that the future acorns destined to grow from the oak would also have to be found already formed. And within those acorns, smaller oaks, and within those … ad infinitum.

Remember that the history of science has been rewritten again and again on theories more or less laughable than this one. It’s enough to recall the spontaneous generation of moths from rotten meat, or the “development and involution of organisms according to necessity” of J.B. Lamarck. Nowadays these ideas seem naïve and silly; yet at one time they dictated the norm.

“Most biologists take it for granted that living organisms are nothing but complex machines, governed only by the known laws of physics and chemistry. I myself used to share this point of view. But over a period of several years I came to see that such an assumption is difficult to justify. For when so little is actually understood, there is an open possibility that at least some of the phenomena of life depend on laws or factors as yet unrecognized by the physical sciences,” writes Sheldrake in “A New Science of Life.”

Between DNA and the Soul

The controversial theories of Sheldrake are not, as was mentioned above, new. Aristotelians and Platonists had already intuited something similar. The first maintained that all species have their own kind of soul—the true form of the body.  For instance, the soul of an oak tree contains a possible oak, like a mold to a pudding. Converging with modern reasoning, the Cambridge-taught Sheldrake suggests that this means DNA possess a “three-dimensional plan of the organism,” attributing to it properties that are not verified. “We know what DNA does,” Sheldrake writes in his paper, ‘Psychological Perspectives.’ “It codes for proteins; it codes for the sequence of amino acids which form proteins. However, there is a big difference between coding for the structure of a protein—a chemical constituent of the organism—and programming the development of an entire organism. It is the difference between making bricks and building a house out of the bricks.”

Genetic scientists have known for years that a DNA molecule only codes the structure of the bricks from which the body takes form and functions. But from here, to know how the specialized cells of the eye, pancreas, or the nerves “know” where to form themselves continues to be the most profound of mysteries. “DNA only codes for the materials from which the body is constructed: the enzymes, the structural proteins, and so forth. There is no evidence that it also codes for the plan, the form, the morphology of the body,” writes Sheldrake.

Contemporary biologists maintain that the anatomic positioning of the embryo’s development toward adulthood depends on complex patterns of physico-chemical interaction, but admit that this process in net yet completely understood. However, according to Sheldrake, this is giving credit to a theory that has not yet been shown. As such, it is not really an objective argument; it is merely a declaration of faith.

Thus, Professor Sheldrake does not let down his guard when promoting change to our concepts from classic scientific reductionism to a more “holistic” mentality. If luck has it, we will not continue as in the 17th century, intuiting that each oak shelters within it a small acorn; hopefully, we will not continue repeating the cycle of negation, unnecessary argument, and late acceptance… ad infinitum.