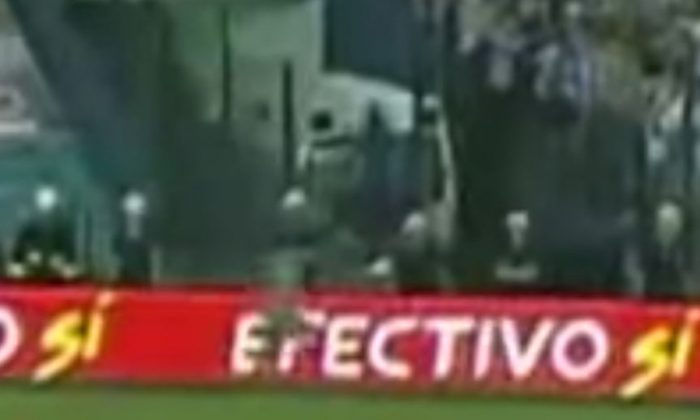 A "ghost" is seen over the letter "E" in a video that's gone viral online. (YouTube/screenshot of PasionFutbolista.Com)
Science

Some claim it's fake
By Jack Phillips
biggersmaller
Print

A “ghost” was apparently filmed during an Argentine soccer (football) match between Argentina Racing and River Plate.

A local soccer website, Futbol Mundial, circled the alleged ghost in the footage. The video shows the silhouette of a man jogging around the side of the match. The figure of the man runs back and forth like he is using the edge of a running track.

The crowd, players, and others apparently don’t see the figure, which is gray and transparent.

The video was taken a few days ago, and it has already generated more than 5 million views on YouTube.

Some claim that it’s been digitally manipulated or a photography trick.

“Camera defect or somebody intentionally made this illusion,” wrote one commenter.

Said another: “My first impression would be, a real person running, due to the lack of quality and distance he looks transparent. Or, it’s a hologram created for entertainment. Or, it’s digitally created. Even if it were a ghost the behavior is odd, why would a Ghost run in such straight line, why wouldn’t a ghost wanting to be seen jump into the game?”

Another commenter responded, saying it’s “because they wanted to get more views on YouTube and we actually just gave them two more.”

However, some suggested it’s actually a ghost.

“A channel with broadcasting rights uploaded the entire 90 minute match to youtube and it still shows up. I doubt a channel dedicated to distributing the games would waste time to do such a thing,” one said.