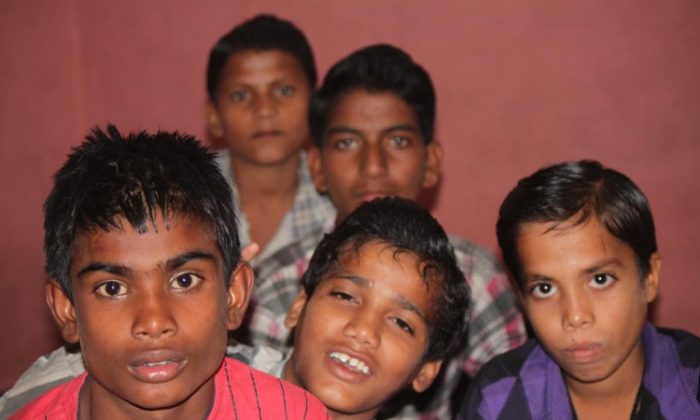 DELHI, India—Many children weave their way through the compartments of crowded Delhi trains, begging for money or picking up empty water bottles—they are the lucky ones. They haven’t been captured by child labor brokers; they haven’t been sold into the red-light district into prostitution, or into other illegal enterprises.

Runaway children from surrounding towns flock daily to Delhi in search of a better life—better jobs, education, and adventure. Boarding the trains without tickets, they arrive in the busiest railway stations of India’s capital city, to a life of extreme vulnerability.

While nongovernmental organizations try to protect them from the dangers that await them, many fall prey and never return to their families.

“The daily flow of run-away children … [in] Delhi railway stations is around 35–40,” said Nehal, who works for the nongovernmental organization Society for Assistance to Children in a Difficult Situation (SATHI). SATHI helps runaway children in seven major stations in India reunite with their families.

Out of the 35–40 children that land at the two main stations in Delhi, the several organizations keeping watch can only rescue about 10–15, said Swati Sharma, program officer for SATHI. It is difficult to keep track of all runaways on the 16 overcrowded platforms of the New Delhi Railway Station where 375 trains pass daily, Sharma explained.

“If a girl lands on New Delhi railway station it is even more dangerous,” Sharma said. “If not rescued within two to three hours, she will be extremely vulnerable and could be forced to the nearby red-light area on GB Road [Garstin Bastion Road]. Paharganj, which is also very near to New Delhi railway station, is also known for prostitution and drugs.”

Babu, 13, from the town of Ghaziabad in Uttar Pradesh State ran away from home to find a better life in Delhi. In Ghaziabad, he was working in a small restaurant earning 3,000 rupees ($55) a month. This is on par with the basic minimum wage of 100 rupees a day for unskilled labor in Uttar Pradesh.

The minimum wage for unskilled labor in Delhi is about 280 rupees a day. The move did not prove profitable for Babu, however. SATHI workers found the boy dirty and hungry in the New Delhi railway station.

Rescuing children from Delhi railway stations is not easy. It takes patience and a kindness to convince the children to go to SATHI shelters. All nongovernmental organization workers have identification badges, so children know they do not pose a threat. The children often do not want to return home, however, not realizing the danger they are in.

In Babu’s case, it was relatively easy to bring him to the shelter. He was hungry and went right away. He refused to divulge information about his family, however, so he would not be sent home.

During the first day of his stay with SATHI he told only lies. “Babu said he hails from Bangladesh. He was very informed and knows Bengali, which is the language of both West Bengal State in India and Bangladesh, and this helped him fabricate such a lie,” Sharma said.

Babu probably picked up his story from a Bollywood potboiler (a B-grade movie). “I was asked by a stranger to accompany him for a bus ride into India,” Babu said in Hindi. “He forced me into a train and we slept. When I got up in the morning, the man was not there. I landed the next day in Delhi.”

Years ago, Babu’s family emigrated from West Bengal to Gaziabad for better job opportunities. Babu has had to work since early childhood due to poverty. He lost his mother at a very young age and lived with is father and stepmother.

When asked if he has been to school, he replied with a sad face, “Vahi tho (That’s why I’m like this)!”

Shelter workers had trouble educating Babu about the dangers of life in Dehli railways stations or on the streets, but eventually got the message through. After returning Babu to his family, the organization followed up a week later and found Babu had remained at home.

It is not easy to locate many children’s families. A child often does not know his address or his parents’ phone number. Some families are very poor and do not have a phone.

In such cases, organizations like SATHI work with police. “In many cases we also physically accompany the child through the locality, lanes and land marks that the child mentions while being counseled, like a well, a big tree, temple, et cetera. A child’s life is very precious, and we believe family is the best place for a child to grow,” Sharma said.

If a family is not traced, the child is referred to the Child Welfare Committee (CWC) set up in every district under India’s Juvenile Justice Act. The CWC again tries to locate the child’s family or refers the child for institutional care with nongovernmental organizations.

Life of Runaways in Delhi

Many children who are not rescued continue life on the streets or in the railway stations.

“They sleep in the station, get up in the morning and pick up some waste water bottles or plastics, sell them to the scrap dealer and get back to the station by night,” Sharma said.

Most of these children eat breakfast in the shelter run by another nongovernmental organization, Salam Balak Trust. They also watch television there and get medical help if required. Before they return to the station, they usually go see newly released Bollywood flicks.

Many of them eat the extra food dumped by long-distance trains. Some become addicted to substances, particularly to inhaling pen correction fluid because it is most affordable.

The children are often beaten by policemen.

“According to National Commission for Protection of Child Rights’ guidelines, there should be no child at the railway stations. Since it was not implemented, Khusboo Jain, an activist sent a petition to the Delhi High Court,” Sharma explained. “The only way police found to implement it was to beat children up, burn their blankets and bed sheets, and scare them out of the station.”

After being beaten up, the children found new spots to sleep on the streets, bought new blankets, and within few days got back to the stations. Rehabilitation of these children is difficult, as they often feel satisfied with their carefree lifestyle at the railway stations. They never feel alone, as the station is always full of people and they have each other for friendship.